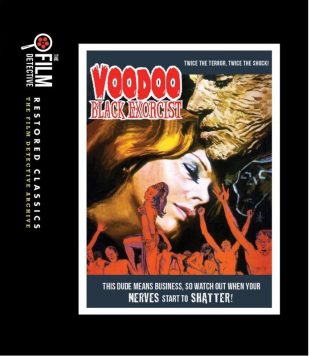 The mummy of long dormant, but powerful Caribbean voodoo priest Gatanebo gets revived on a luxury South Seas ocean liner as a big buff bald guy and proceeds to terrorize the passengers. Gatanebo beheads several folks, occasionally reverts back to his prune-faced mummified state, and falls for the ravishing Sylvia, who reminds him of his old flame Kenya.

Out now through the restored classics label The Film Detective, the 1974 black magic cult film Voodoo Black Exorcist reminds us why cult 70’s cinema is truly WTF! With no extra features on this release but a trailer and some miscellaneous, the one disc Blu-ray features brings a restored guilty pleasure from the original 350mm print for a whole new generation to witness.

Voodoo Black Exorcist tells the story of two lovers separated by a horrible attack over a 1000 years ago. Having a secret love affair, the film opens off of a body of land where Nibo (Aldo Sambrell) and his big wigged, painted tanned lover are discovered by a the woman’s husband or father or uncle? Nibo kills this man and the scenes color becomes very overexposed turning into a beach scene that blends a bad version of Grease and a heavy drug trip. Cutting to a cavern scene, we see semi and nude tribes people chanting and engaged in a ritual that turns Nibo into a mummy and causes his love to be beheaded. Jump ahead 1000 years and we are now on a cruise filled with the variety of cookie cutter wealthy that have Nibo’s coffin on board after it was acquired by a scientist who is also a passenger. As the cruise ship pulls away and begins to sail, the cruise entertainment and an on-board eclectic tarot card reader fully and accidently recite an incantation to resurrect Nibo out of his hibernation and turning from a wrinkled mummy back into the Nibo we saw in the opening. Nibo realizes that he finally can do what he wants to do after being trapped in the mummy state for centuries and watching as the world has changed. He wants revenge for loss of his life and the love he lost by any means necessary. As he plays cat and mouse on the ship, he finds the scientist’s assistant and lover Silvia (Eva Lion) who reminds Nibo of his lost love. As the cruise heads towards shore, Nibo and his voodooed assistant will murder and bring evil to the ship and its passengers. Nothing will stop Nibo from getting his full revenge!

Called such descriptive phrases as, “Worse than awful. A Near Masterpiece of Awfulness. I Need sleep, look no further and the cream of crummy.” You wonder why anyone would want to restore this film? Found previously on one of those 50 pack of cult horror collections in Walmart, you shake your head on why you would waste your time? I will be the first to say that I did not hate it as much as most but at best it is 2 out of 5 for me, maybe. I will give credit where it is due. First, it was shot on film and to see the look and texture of film is worth the 90 minutes even if I will never get back in my life. Produced in Spain, the film has authentic film locations in Jamaica and Haiti which as bad as it may look, the production design of the ritual scene in the opening and the beach scenes feel like cinema of a bygone era. Directed by Manuel Cano, the film has some talent that is connected to Voodoo Black Exorcist. Actor Sambrell was in the classic spaghetti western The Good, The Bad and The Ugly. While the Fernando Sanchez who played Comisario was in Return of the Evil Dead. The writer of Voodoo Black Exorcist was a very successful screenwriter for film and TV through the mid-90’s and this also was one of Cano’s last films over his decade of primarily Spanish films. 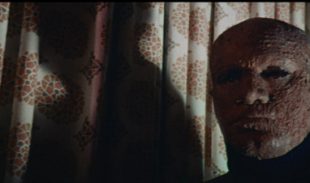 The film overall I believe would have some influence from the classic monsters and the tragedy that surrounds them. A pretty formulaic story, Voodoo Black Exorcist has its share of heartfelt moments that balances the thinking of the 1970’s feel, European style, and the true WTF! moments weaved into the narrative. Voodoo Black Exorcist is a product of its era and will make you laugh if no other reason than the dubbing of English over the Spanish. The cast of characters are very stereotypical to almost cookie cutter of what the European filmmakers thought of the United States upper tier. As Nibo, Sambrell is a bit over the top but is an actually entertaining and tortured villain. It would not surprise me if the 1999 remake of The Mummy drew some influence from Voodoo Black Exorcist overall which has some replication of characters and scenes on a much larger budget. The look of the film is gritty but decently lit. The majority of the film takes place on a ship set that actually fits the elegance and wealthy mindset the characters find themselves in.

The violence and kills fit the raged motivations of Nibo. Cano and DP Roberto Ochoa have a creative way to execute in the way they framed and lit it. Ochoa’s cinematography is a highlight with some impressive overhead shots that capture a lot in the frame and elevate some scenes. The editing is rough throughout with some abrupt cuts from one scene to another. There is a very classic mid 60’s Batman: The Series style action scene with Nibo trying to escape in the most overdramatic ways minus the BANG! BOOM! And POW! The film has its balance of entertaining moments to go along with some very uncomfortable and some racist scenes that add to the WTF! ending. Not trying to by humorous (I hope), the investigator is such a sleaze who is one of the uncomfortable characters throughout. 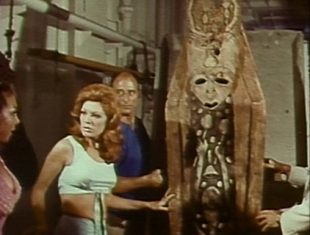 An element of this less than stellar production is the way they distinguish the flashback scenes and non-genre scenes by saturating the space with a reddish (I guess) gel fill and this weird opera style music. Perhaps I am not as much of an authority of cult style 1970’s cinema, but I guess this was standard for Spanish cinema? One thing that I felt worked in the film, was the connection of black magic and ritual that supports the mummy storyline. I felt the locations, choreographing of the ritual, and props fit what they were going for. Definitely a guilty pleasure piece of cinema, the classics label The Film Detective does a good job rescuing a film we don’t need but can enjoy if you have nothing else to do in your life. For anyone who wants to fully commit to the Blu-ray should create a drinking game around Voodoo Black Exorcist including a drink for every minute there is nothing to do with an exorcism at all. It will enhance the true WTF! and numb the cinematic pain ahead.

Purchase a copy of the Voodoo Black Exorcist here