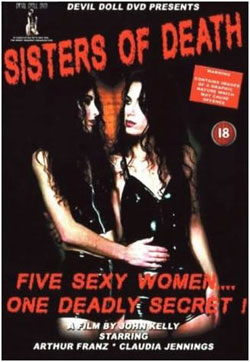 Meet The Sisters they are kind of like a small sorority. Like most sororities The Sisters have a complex initiation ritual that a pledge must go through before they are accepted into the sisterhood. Something goes horribly wrong during an initiation and one of the young pledges ends up at the wrong end of a loaded pistol. For seven years the remaining members of The Sisters haven’t really talked about the accident, or really to each other. Their silence is about to be broken however as each of them receives an invitation in the mail for a reunion along with five hundred dollars cash to pay for expenses. Who sent out the invitations? Well that is revealed along the way.

“An invitation to six beautiful women…for a deadly sorority reunion!”

When one reads the summary on the back of the box for Sisters of Death one could easily get the thought into their heads that they are about to watch a standard paint by numbers body count movie, those who have such thoughts in their heads are only partially right however. Sisters of Death is more than just your typical “body count” film. The film was actually filmed in 1972, but it wasn’t released until 1977 and it stars some very beautiful women from the era including one former Playmate who died a tragic death not long after the movies release.

Sisters of Death starts in a very 1970’s and very creepy way. The Sisters are all standing in a group performing an initiation ritual. The girl’s faces are all hidden behind shrouds so their identities are unknown to the viewer. After the opening speech is given to the young pledge class one of the sisters begins to put a loaded pistol up to each pledges head. The viewer watches in horror as the trigger is pulled and only a harmless click is heard. A few minutes later once again the pistol is placed against yet another pledges head only this time there isn’t a harmless click. There is a loud gunshot and we are offered a glimpse of a young girl holding onto her blood stained face screaming, one had better not blink because it really isn’t on the screen for very long. I should point out at this moment that Sisters of Death is not a gore film. Most of the deaths involved in the movie aren’t shown on screen. When the dead bodies are found it is usually a beautiful girl lying in a pool of blood, most of the time it isn’t even a human doing the killing but I will get to that in a minute.

After the opening sequence the viewer is treated to the credit sequence, done in complete 1970’s fashion. There is just something about the movies from this era that always catches my attention and I especially love that this type of sequence is rising again in popularity due to young film makers.

When the sequence ends we are introduced to the first of The Sisters. Her name is Judy, played by former Playmate Claudia Jennings. Judy receives an invitation in the mail asking for her attendance at a reunion for The Sisters. After Judy reads the invitation she is mildly shocked to also find five one hundred dollar bills neatly packed into the envelope. Judy quickly gets to work attempting to find out who is behind the reunion. When Judy calls one of the other Sisters she is shocked to learn that her sister isn’t behind it, in fact the sister believes that it was Judy who actually sent out the invitation.

Over the next few sequences the viewer is introduced to the rest of The Sisters. There are five of them all together and all are from different walks of life. Judy is in love with a very powerful man and is now living the kind of life a woman who wants power would live. One of The Sisters is a straight up hippie chick that is seen doing all kinds of weird things throughout the movie. One of The Sisters decides to hitchhike to the rendezvous sight. When her ride starts to get a little too fresh the woman pulls out a Bible and starts reading it, for some reason this causes the pervert to stop trying to grope her and instead he starts laughing.

As the women arrive at their destination and start to greet each other the viewer gets to meet two guys who are sitting in a car. While the guys are sitting in the car they make comments about the women’s looks and about their job. The two guys are hired by someone who isn’t named to bring The Sisters to a secluded location and that is really all they are told. Their car however has all but the needed windows blocked off with sheets, oh yeah it’s also a station wagon. The women are all exchanging pleasantries with each other when the two men approach them and tell them that they are their escorts to the reunion. Some of the women are ready to jump immediately into the car, a few are kind of skeptical at first. Personally I would hope that most women who are reading this would be a lot smarter than to just randomly jump into a station wagon that just screams “rape mobile”.

The women however don’t even seem phased during the ride. The group of five mostly laughs and looks pretty for the camera while the two men who are driving try to steal glances at them and their revealing clothing. After about an hour of travel one of the girls speaks up, but they are soon at their destination. The mansion where the women arrive is seriously out in the middle of no where surrounded by a large fence. The host for the party spared no expense however for the girls. As the group arrives they find a very large welcome sign and a small feast complete with large amounts of alcohol. There is a swimming pool and conveniently the women also discover that their host has also left each of them a swimsuit so that they may enjoy the pool and the viewer may enjoy their bodies. While exploring the house one of the girls also finds a painting in one of the rooms, only the painting is covered by a large black sheet. Instead of removing the sheet to possibly get a clue as to who their host is the girls decide to start partying.

The two hired hands are only gone for a minute after dropping the girls off when they decide to head back. It’s a party after all and both of them being swinging 70’s bachelors why should’t they go enjoy themselves with the happy women. As the two men make their way up to the house they discover that the fence surrounding the house is actually an electric fence. They can tell that the fence is electric because it has a box with a red light bulb on it, one of the guys makes the statement that he really doesn’t trust light bulbs (yeah the dialogue in the film can get pretty unintentionally funny for most of the film). Electric fence or not nothing is going to stop the guys from joining the party and it’s only a matter of time before they are inside. At first the woman are uncomfortable with the two guys there but after a few drinks everyone lightens up and it becomes a party.

The host of the party is of course revealed to the viewer not long after the women arrive in the mansion. For most of the film the host appears to simply stalk around the mansion and use a lot of secret passages. He also spends a lot of the movie making his own bullets and in one scene he plays a really mean flute solo (seriously). It isn’t until the next day that the host makes himself known to the guests of his mansion. Of course he isn’t very happy that his hired hands have decided to attend the party, but they will only be around for a little while. The host for the reunion is actually the father to the pledge that was killed by the Sisters seven years ago and for the next few days while he has them trapped in his mansion he is going to stalk and kill each and every one of them.

Sisters of Death is a great example of the prototype of the slasher film. All of the elements that in the next few years would become part of the formula for a successful slasher film are there. There really isn’t any nudity or gore, as I said earlier in the review most of the violence in Sisters of Death happens off of the screen. In fact the host tends to use animals to do his dirty work. There are several scenes involving a tarantula until it is squashed with great authority, a rattle snake makes several appearances throughout the film and there’s even a really mean dog that does the dirty work. Combine the animals and the electric fence there really is only a couple deaths in which a murder weapon is actually used.

What sets Sisters of Death apart from most body count films however is that about half way through the movie the killer is revealed complete with his back story. He doesn’t just silently stalk his prey either, in fact he dramatically introduces himself by removing the black sheet from the painting showing a portrait of his murdered daughter.

Sisters of Death just seeps with tension and atmosphere though, well when the women and two guys aren’t doing something completely stupid. When I make this statement I mean it for instance two of the group decide to make an SOS sign for any planes that fly over head to see, it really is too bad that the letters of the sign are about the size of a mouse pad. Two others also attempt to dig a hole under the fence using a hatchet and a funnel, because you can get much more done that way. Whenever one of the group slips away from everyone else though it is only a matter of time before they are found murdered. As a viewer one would think that the group would simply stay together to avoid this but that wouldn’t give us much of a movie. There are also twists and turns everywhere about the reason for the reunion, apparently one of The Sisters went to the murdered girl’s father as a witness and the two are working together. I won’t even mention that the final scene of the film is so wonderfully 1970’s I wish every movie would end this way.

Sisters of Death is great fun for those who like beautiful women and mystery, a sense of humor however is needed to fully enjoy this piece of drive in past.