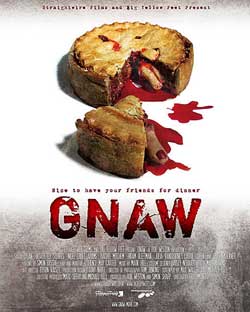 Six friends holiday in the heart of the English countryside. The holiday turns into a culinary nightmare when they discover that their hosts are a sadistic family of cannibals set on turning their guests into their next meal!

I miss the days of heading into the Mom and Pop video store that was a mile away from my house. They had a room dedicated to horror films and there was a vast array of direct to video slashers to choose from. Most the time I never knew what I was grabbing, some were good, some weren’t, but it was always worth the trip. Watching “Gnaw” gave me that feeling, like I had browsed around, read the description on the back of the box and said, “What the hell?” It wasn’t like discovering classics of the genre, just a decent little flick with a decent amount of blood and gore that was done using practical effects and keeping away from computer effects which is always a plus in my book. Blackstock Farm looks like the perfect getaway for a group of six young adults. A place to relax, sleep, hike, and fornicate.

After arriving they meet Mrs. Obadiah (Carrie Cohen) the farms caretaker who takes her time to prepare home cooked meals for everyone during their stay. One by one the friends begin to disappear and the group begins to grow suspicious as their numbers grow smaller. Who is the mysterious Slaughterman (Gary Faulkner) and what does he have in store for our group? It’s a simple story, a bit “Texas Chainsaw Massacre” and a bit “Friday the 13th” and capturing that essence of an old school slasher.

The film doesn’t offer up much in the way of character. It’s a rarity these days, but the group was likeable and the acting, while far from perfect, fit well into the film. It’s hard for a film with a running time of less than 75min to create much of an in depth story for our characters to play in but there was just enough. The problem I had overall, even with its short running time, was that it still felt slow, like t took too long to get rolling. There was just something off with the pacing during the films first thirty minutes.

I found myself growing a bit bored but it was able to bounce back. It still felt like the majority of violence occurred off screen, cutting away to the tools at work, blood pouring down, and not enough of the in between. I will give credit where it is due and the sounds effects for all of the human butchering was pretty top notch. For some folks, those sound effects will be enough to make them cringe, I’m not quite that easy.

Even though the film was shot in the UK it still felt like an American slasher which is fine, just wish it had more of a British sensibility which I didn’t feel like it did. The overall look of the film was very professional, excellent lighting, with a few really nice shots and setups. For example, there is a scene where the electricity goes off and our frisky couple are messing around in the dark, when there is a surge of light, we see our killer standing by them watching. It was a nice touch and when shots like that are done right they can be very effective and it worked here.

With “Gnaw”, director Gregory Mandry pulled together a solid homage to the films many of us have grown up on. This is why it is important to keep an eye on indie horror, especially now when so man filmmakers from that same generation I am from are releasing some really interesting stuff, shying away from the computer effects that many larger budgeted films have been using and sticking with the make-up and in camera effects. I hope to see more from Mandry, he has a love for the genre like many of us do. Nothing perfect but a noble first effort that may entertain for an hour and some change. Check it out.