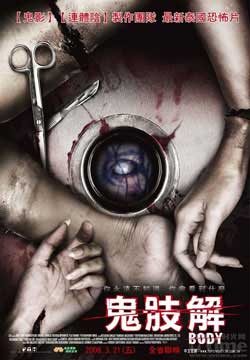 Chon, a med student, starts seeing a psychotherapist after he dreams about a woman who he had only met once in a restaurant. In his dreams, a mysterious man murders her, slices her body into pieces, and flushes them down a toilet one by one. The murderous dreams haunt him into his waking memory, and eventually he feels as if his own body is being dissected and carved up by the surgical knife. Slowly, the terrifying images take control of him. He comes to believe that the dead woman is sending him messages through these nightmares. But these are not messages for him, they are meant for her murderer.

Body #19 is a unique film in itself. Much like many Asian Horror films it’s deep into translation, composition and meaning. The narrative often changes directions as the director Paween Purikitpanya chooses to take us to different planes. What was most compelling to me was the use of camera work, movement and impactful moments of horror. The camera tends to take different directions often showing us views that induce paranoia and voyeurism. An obvious trait was the frequent use of Bird’s-eye view camera positioning, sometimes following the subject from room to room. At other times Purikitpanya is very inventive zipping across floors, thru ring holes and a variety of other interesting moves.

Another aspect worth mentioning is some absolute beautiful and horrifying visuals. At one scene the brother and sister are taking a car ride, however the scene is quite mesmorizing even for its quick appearance. At other times when they turn on the heat its full force as the copse lady leaps around, manipulates her hair and induces a few kills that Freddy Krueger would have been proud of. It is important to mention that there are a few really cutting edge visual tricks thrown in here and there that work quite well. 2 that come to mind are the deteriorating body scene and the matrix-like body pieces segment. The FX are not overused either. They are presented at key moments to drive the horror aspects.

To clarify the story, Chon an engineering student who is living with his sister is haunted by bad dreams. These dreams are pretty vivid, They start out with images of body parts being hacked and sliced and move into the realm of being haunted by a nasty looking corpse named Dararai who appear to have been dismembered and re-sewn together. The of course there is CGI cat and some babay fetus that pops in now and then. All these visions are mixed with Chon ending up in places he seems to have lost memory of how he arrived. Now these dreams are pretty apparent that the nasty bitch is trying to tell him something… Though the story does reveal everything including a surprise ending and some fact back-tracking. With the tagline “The Dead will tell ther Truth” we know where this is leading. No visual goes unexplained, even the crawling fetus. The story stars: Arak Amornsupasiri, Ornjira Lamwilai, Kritteera Inp*rnwijit and Patharawarin Timkul

The story itself seems to position itself on the hallucinations that our main actor Chon (Arak Amornsupasiri) is having. The visions tend to jump from dreams, to hallucinations and into reality. This idea though is not uncommon for Asian horror and for that fact one story trait that I really enjoy. In some ways it feels very familiar to grounds that Cronenberg would employ in his films.

I enjoyed this one very much and like the change of visuals. At 2 hours it is a lengthy movie, though the time well spent to map everything out. You may find yourself lost at moments, but that is the trend in Asian Films. If you can stick it out, there are some real treasures to behold.