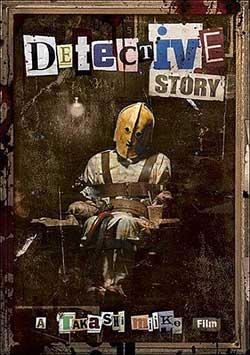 In this shocking thriller from controversial filmmaker Takashi Miike, businessman Takashima Raita (Kuroudo Maki) and private eye Kazama Raita (Kazuya Nakayama) hunt for a brutal serial killer with a bazaar fondness for human organs. When three women, one being Kazama’s client, are found dead and stripped of vital organs, the two Raitas team up to find the murderer, and the trail leads to an eccentric artist with a unique artistic medium.

When I heard word that a new Takashi Miike’s film was coming out, the anticipation was set pretty high. Being a fan of many of his previous works, I’m always ready to see what kind of crazy sh*t this prolific director pulls out of his magic hat.

Detective story starts pretty subtle and in some ways slow moving. We get a intro shock scene of an artist shoving body parts into a grinder to make fresh paint for his compositions and then with a solemn sweep are taken into the lives of 1 detective named Raita Kazama and some new neighbors moving in next to him. His new neighbor is also named Raita. Why they chose to use the same name for 2 characters is beyond me.

Raita lives alone and runs his own detective agency. Nothing out of the ordinary, just case after case that comes with the job as a retired former member of the police force. One night while sharing a few drinks and conversation with the neighbor, a woman comes knocking after hours in search of help. While her desperation isn’t apparent at first, Raita informs her to just swing by the office in the morning Morning comes and Manomi Inoue shows up dead with her liver pulled out.

You can always chalk one up for Takashi to throw in something bizarre along the way. Really it’s his talent for this that separates him from just another action, horror or Asian stylized film.

Raita as the sole person she spoke to prior to her death becomes a suspect for murder. Raita determined to now seek out answers on his own begins his own investigation. The killer is assumed to be a stalker or some capacity with a sick sense of violence. Raita also calls upon his neighbor “Raita” to help him in his search.

This investigation begins with a visit to Gomau a retired maniac of sorts that remains confined to a chair as his body is deteriorating. The cover of the movie will help paint the picture on that one. Apparently at an early age Gomau was quite the killer himself murdering 6 people. As retribution he was burned alive as the parents of the murder victims dosed him with gasoline. The courts took pity on him and he remains in care wearing a hood and various aids to assist him in his fragile state. We get some advice from one maniac in regards to another. “the nightmare is in the paradise”. Ya, figure that one out……

Camera work is pretty solid which at times is simply left to a single static shot unmoving in the background to capture the entire conversations in whole. These are used sparingly but work when they do.

So I took the ride expecting some really brutal turns. The film essentially starts to become a who-dunn-it sort of film that tries to solve clues left along the way. While there is still a few mishaps of violence that almost jump off the screen in pain toleration the movie never really comes into a great 3rd act. The film “Psycho” will come to mind in its relation though it also feels like a bit of a letdown. A back story completes its cycle and the whole ordeal kind of asks the question…”what was the real point to this all”.

I have seen many of Takashi’s films and came into this one with high hopes. After almost 2 hours, I have to say it mostly wore me down with no real delivery. It’s not a bad film, its just not much of an impact. From the bizarrely haunting cover art, I really expected alot more. If your a fan, then check it out. If you are looking for a great Asian horror action film, then I’d move this one off the list for a bit. That reminds me, i do have some old films of his I never got around to ….maybe now is the time?