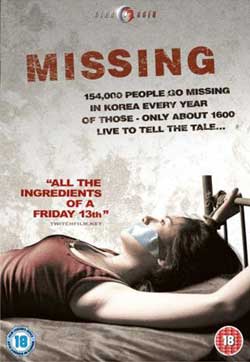 Hyeon-jeong’s sister is missing and she fears for the worst. Via her sister’s cellphone, Hyeon-jeong learns that her sister stayed in a countryside vaillage. She goes to the village to find her sister and stops at the local police station for help. Because of the little evidence she has, the police refuse to offer help.

Hyeong-jeong then finds a witness who thinks she saw her missing sister near the home of an elderly man Pan-kon. When Hyeong-jeong eventually arrives at the elderly man’s home, her worst nightmares are to begin.

It’s probably not too uncommon these days when checking out a new Asian horror release to have that sense of deja vu. After all, it’s been a trend for quite some time to base several of their horror films around the capture of a girl, who is tormented and raped by a stranger (usually male) who does so just for the #@%# of it.

Missing is one such film that takes on this premise with the same meat that several films before it has. If your like me, you see much of this coming with just enough interest to guess why and how.

Why is he doing it? (assuming that there is a reason), How far will he take it (guessing that the antagonist is purely just evil and will experiment along the way . Without these 2 factors much will fall into a redundant and derivative track that repeats everything else before it. So that brings us to the story.

We have one lovely female who you know right from the get go is going to end up in some compromising situation that she doesn’t approve of. We have the naive boyfriend who wont make it past the first 10 minutes and then we have the criminal sicko who has a purpose and a plan. Upon kidnapping, and caging up our victimized subject, she is immediately reduced to a submissive at the mercy of her captor.

I did some research and it appears that this story is based on a true story of a fisherman who killed 4 women in Bosung. The film really never admits this, but in any case, this is what I’m hearing. The end of the film adds a clever cameo based on this true story interjection. (if you are paying attention)

Now, if you are seeking cold visceral value, then “Missing” has its share of that. Axes in the head, meat grinders, rape, beatings….these are the key film elements of the Asian horror market when it is delaying with psychos. It think the primary difference lies in what is bring to the table that adds an interesting story element. I would say that “Missing” lacks that element. We never really care that much about the main characters besides the fact that one older nut bag likes to kidnap girls as play toys before deposing of them. I instantly got that feeling of one who knows the entire story before its completion. I was right on several levels which proves my point. The formula is simple. Victim, murders, protagonists, victim, empowerment and revenge. You could match those elements of to 100 others and still come out the same. On the cover it sports the quote “all the ingredients of Friday the 13th..” Well that would be incorrect and seemed like a token “lets get something on the cover” statement. It has nothing to do with Friday the 13th, masked characters, multiple young adults or slasher style kills….so where did the comment come from? Did Twitchfilm even watch the movie? The movie is “wickedly cruel” and a “hardcore thriller”. These are my quotes, but they make sense to what transpires in the film.

The main antagonist succeeds at subjected cruelty, though he is not the image of a psycho and that element seems to contradict the relationship. The girls of the film who become victims, are perfectly fit for the lie of the table and get abused roles but they don’t add a whole lot past that contribution.

I think one of my biggest complaints is the title itself. If you’ve ever googled Missing on IMDB, your going to come across a whole boatload of titles that sport the same “Missing” title. This makes the film harder to find and associate with and harder to market in an over saturated re-use of film titles. Of course it’s original title “Sil jong” doesn’t inspire much either. Note to Asian filmmakers, please pick titles that stand out so that your film might have a chance just on face value alone.

In summary, which is always important, Missing” does delivers some cruel moments and is well shot. The ingredients are derivative,. aren’t like Friday the 13th and fall into a batch of like films that have sprung up in the last few years. Give it a go if you ok with all that was mentioned. If not, then there are other films you could invest time into watching. 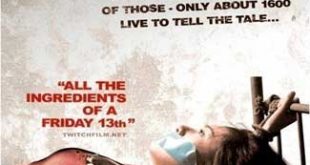