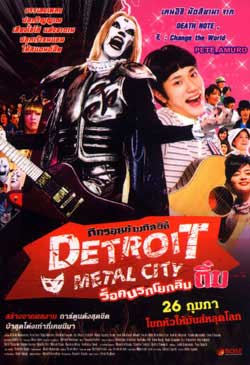 Soichi Negishi moved to Tokyo to chase his dream of becoming a musician playing stylish, Swedish-style pop. Instead, he finds himself leading the death metal band Detroit Metal City, or DMC, as the costumed and grotesquely made-up “demon emperor” Johannes Krauser II. Although he hates the role and the things he has to do as a member of the band, he has a definite talent for it. Adapted from the hit Japanese comic book by Kiminori Wakasugi, the movie follows Negishi’s antics as he tries to reconcile the two very different sides of his life and find out what it really means to achieve his dream.

Destroyed by violence resurrected by vengeance on a one way ride to hell with no turning back on a road paved with blood, death, regret, and pain he is…..Krauser! Actually DETROIT METAL CITY has nothing to do with what I just wrote down, well, maybe it is similar to some of their lyrics to one of their songs but there is no killing or gore or real horror at all but the opening credits are somewhat sinister and the band members of DETROIT METAL CITY look sorta like they could be in a vampire movie and they look like they could be made into cool toys, so why am I reviewing this movie for the most badass horror movie reviewing website on the net?

Because it’s a good genre piece and a funny comedy from Japan that is worth a peek if you do like comedies, rock n’ roll, and or Death Metal. And I am a huge Death Metal fan, I am listening to EMBRYONIC DEVOURMENT as I type this review out and there are not that many movies in any genre that focus on Death Metal. All I can think of is DAY OF THE BEAST and while it does have some extreme Metal in it it is not about a Heavy Metal band like DETROIT METAL CITY.

But first I gotta tell ya how lucky we are here in San Antonio to have the Alamo Drafthouse. I don’t know if you have a place like it in your town, I hope you do for your sake, but the Alamo Drafthouse plays all the movies that your local cinemaplex shows but also offers a host of special events showcasing all sorts of movies. They have anime Mondays, Weird Wednesdays, exponential movie night, every once in awhile they will have a mini movie marathon of some of the FRIDAY THE 13th films, or the EVIL DEAD trilogy and they also have a Asian cinema night.

This is when I saw DETROIT METAL CITY. But wait, that’s not all. At the Drafthouse they serve alcohol and you can eat a whole meal while watching a flick. Even with all this cool stuff going on I almost didn’t go because of a lack of interest, being a cheapskate, general laziness, but mostly because I did not want to go alone. But after checking out the trailer for DETROIT METAL CITY I said ” screw it!” and went anyway.

When I got there I was the only person in the theatre, which is kinda cool and my server, Justine was very nice (it’s her job to be nice) and I ordered a coke and basket of fries with cheese and sat back to enjoy the many trailers of bad 1970’s kung-fu trailers they were showing before our feature began. A few other mopes wandered in while I waited and I gotta admit watching these obscure previews got me in the mood to see some kung-fu movies. And for some reason they showed the trailer for the Sylvester Stallone Antonio Banderas movie, ASSASSINS.

Finally DETROIT METAL CITY begins and it starts off with our main character Negishi. He’s taking a walk with his mother before he heads off to Tokyo to go to school and try to become a popular musician playing Swedish style pop music. He is a nice and well mannered young man full of dreams and aspirations doing music that is positive and filled with hope and love. And he comes off kind of gay but you see early on that he indeed does like girls. And then the credits role in and they got me in the mood for some Death Metal madness! And some comedy.

When his dreams of becoming a pop music sensation he tries out for a band and that band is DETROIT METAL CITY. And with his talent for writing good Metal music DETROIT METAL CITIES popularity soars and they get bigger and bigger. Funny thing is that Negishi does not like Heavy Metal, he doesn’t like the brutality of the music, or the violent lyrics or the fact that he has to wear corpse paint and wear a theatrical costume and pretend he is a demonic rapist from hell! And he is terrified of his manager who is really the driving force behind DETROIT METAL CITY and will not let Negishi leave the band. She is played by Yasuko Matsuyuki and she is really mean to Negishi and gives him a few kicks to the cranium and tries to get him to embrace the Metal lifestyle. Very aggressively! And things get worse for Negishi because he likes this girl, a old college friend named Aikawa and she is exactly what he wants in a girlfriend. She’s cute, nice, and caring and likes all the trendy things he likes like current fashion, clubs, magazines, music, everything.

Except she does not like Heavy Metal and especially DETROIT METAL CITY so Negishi must hide his Heavy Metal persona of Krauser from her. Which leads to alot of funny situations and while I figured I would like DETROIT METAL CITY I did not think it would be as funny as it is. I do not watch that many comedies and I think DETROIT METAL CITY uses the formulas of alot of older comedies but it is not a American teen or romantic comedy so I thought it was unique enough and carves out it’s own niche. I really liked the character of Negishi and he plays such a nice wimpy guy and all his mannerisms were funny, the way he whines and cries as Negishi but then he is pretty convinving as a Heavy Metal maniac.

And I wish DETROIT METAL CITY was a real band! Or are they real? Can anyone confirm or deny this? I mean, there was real music playing during the parts where they are onstage and it sounded really good and I know Metal fans will like it if they hear it. Gene Simmons is even in this movie and he plays Jack IL Dark, the world biggest and greatest Metal star and he wants a showdown with DETROIT METAL CITY and Krauser. It’s kind of cool that Gene Simmons is in this but kind of lame as well. He is a true rock star but so out of touch with the Metal scene and he is just a old man now.

Another thing I did not realize about DETROIT METAL CITY is that it will remind you of METALOCALYPSE and I found out that DETROIT METAL CITY was a manga and a anime before the movie came out. And like METALOCALYPSE it is funny and it is stupid, and silly, but as it progressed I could see that DETROIT METAL CITY actually had a heart. Negishi lives by a motto that no music equals no heart and believes in his music and it’s ability to inspire others to do what they love. And even though he does not like the band he is in and the music they play but he finally realizes that Metal does inspire people to do what they love as much as his pop music inspires him.

I urge you to see it, even if you don’t like Death Metal, DETROIT METAL CITY had me laughing; I never had to force it and even though there were only about 8 other people in the theatre everyone else was laughing at all the right spots and one guy even clapped at the end. You can find it on dvd and and I plan on picking it up. The Alamo Drafthouse is a great place and they seem to be showing obscure films on a weekly basis and I had a good even though I had to go by myself which is pretty depressing.