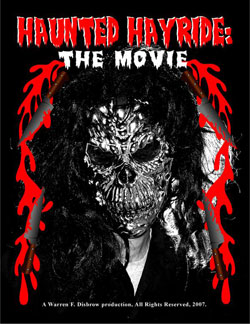 For a night of fun, four teenagers decide to attend the final midnight Haunted Hayride of the year at a local farm. Little do they know, a masked serial killer is stalking the Halloween Farm, which consists of a Hayride, Haunted House, and a Halloween Store. The killer brutally murders all the hired Halloween actors & farm workers, and takes the final tractor-pulled tram on that final hay ride and begins killing the paying customers. The Killer stalks the four teenagers around the Haunted Hay Ride trail, the corn maze, the Haunted House, and the farm. Who will survive?

One of the great things about working with a horror mag is being informed about a film otherwise you may of not known about or knew existed until they become marketed. Hay ride is one such film. Warren obviously has a nice mix of classic horror and modern visuals in his bag of tricks. We are introduced to a character named “Hate” who wears a Halloween mask that is permanentlt screwed to his skull per self infliction. Hate speaks with a demonic voice and seems bent on killing folks at will. Upon first look, you might be saying to yourself, why choose that mask, when there are cooler ones on the market? Although that may be true, that notion quickly dissipates as we connect with him in the way early Carpenter films may have influenced us. My guess is the mask helps to reflect light better for night scenes. Which alot of the film is shot. 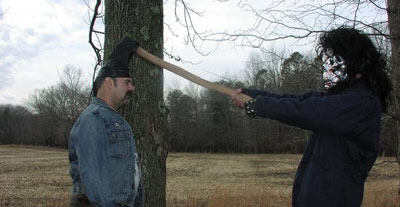 It leads off with a great intro in where Hate saws his abusive father into pieces slowly as he hangs from the ceiling like a side of beef. That pretty much sets the stage for his ongoing rampage. 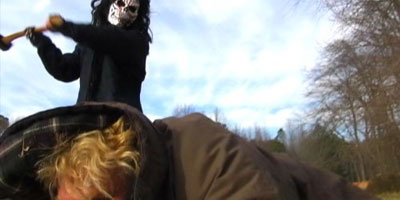 Fast forward now to the haunted hay ride, the focal point of this film. The ride itself is a annual Halloween attraction that appears to draw alot of locals for a scary ride and night of entertainment. I’m assuming the footage they show is what the ride entails and looks like alot of fun. Or should I say they have a alot of fun “with” it. As the locals enjoy there nightly haunts, Hate stalks the workers in the background until killing them off in gruesome demise one by one. 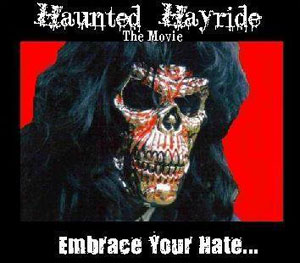 Now again I should reaffirm the production doesn’t have the Hollywood edge film color correction, crane maneuvers and rapid editing that most films do today but it does has its slasher charm. 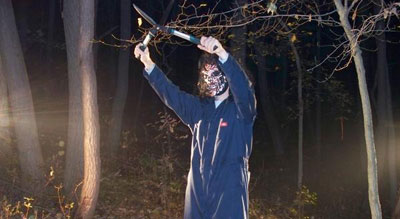 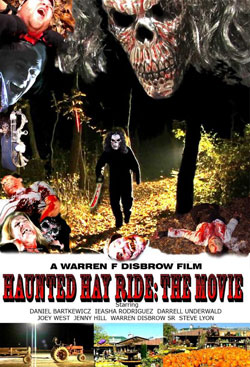 My only criticism would be that the editing needs to be tightened up in spots where the dialog comes across scripted rather than a natural pace, these are pretty obvious and can be fixed pretty easily. In addition, I probably would have cut some of the laborious footage of the hay ride to keep the pace going a little faster. A bonus to this movie is a nice mix of score and soundtrack music that I felt was well composed. The kill scenes are performed with nice cuts and a dose of healthy aggression. They are also filmed just enough to get the point and move on to the next scene. Strangely enough there is a few scenes that I had to laugh, whether intentional or not. My fav moment was the “puppet man” exhibit. You’ll know it when you see it. In some respects, that scene is the funniest and nightmarish wrapped in one. Also there is a weird intermission of a surreal dance routine that looks like a nightmare haunting you from the 80’s. You’ll most likely find yourself saying..”what the hell was that?” Though I kinda dig these bizarre interworkings, so I would call it a keeper as much as any Napoleon Dynamite scene. Then as the film progresses we are shown a battering of axe to the head kills. It is supposed to be horrific, but I found it kind of funny the way he just goes about whacking folks in the melon like chopping into cheese blocks. 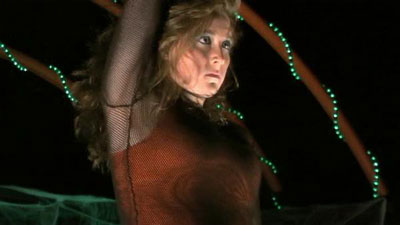 Warren seems like the kind of get-it-done Director that sets out a plan and sees it thru to till the end. A trait that is becoming more apparent in filmmakers today equipped with the basic tools to get a movie shot. I would be nice to see how it all comes together when a big budget is thrown at him. This film has alot of good head chop moments, some middle America weirdness, a few laughs and a interesting character as well. Not to be cliqued but Hay ride is a fun ride in basic filmmaking with thrills an chills.