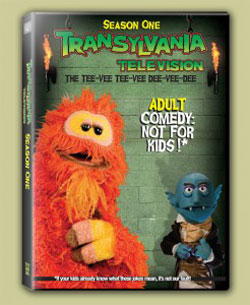 A dysfunctional family of misfit monsters try desperately to run an obscure television station deep in Transylvania, with worldwide broadcast power and the ability to reanimate dead TV shows.
The Vampire Le Shoc is king of his castle, but struggles vainly to maintain order while taking delight in the suffering of his motley crew of minions. And he ain’t your run of the mill Count, either, he’s a LeStat-dressin’, nosferatu-lookin’, Richard-O’Brien-from-Rocky-Horror-talkin’ creep with some serious issues.

Furry J. Ackermonster, the station’s new intern, is a bright orange yeti, who having recently graduated from an American college, is struggling with student loans, laziness, and a burgeoning pottery collection. Enjoys beer, snowboarding, and hairy chicks.

The station’s majordomo is Batfink, a surf-lovin’, kustom kar creatin’ bat. Think beach blanket beatnik with wings. He manages to keep the station running via the power of the Frankenstein Device, the same contraption that gave life to the Frankenstein Monster. When used to boost the signal of the station, it gives old shows NEW LIFE – and turns them into far-out parodies in the process.

They are joined by Dwayne Frankenstein, a fella who’s wired just a little bit differently than the rest of us. The Frankenstein Monster has been done to death, but you’ve never seen him like this: a brain-damaged, working-class Brit soccer hooligan made from 13 different people. He may sound dense but he’s not naïve, and has been known for moments of brilliance in the midst of an otherwise stupefying existence.

Tune in to Transylvania Television: the Retro Monster Comedy Series that’s really not for kids, not necessarily safe for work, and known to promote skull decay.

The great thing about horror is that there is always a new interest or take on something familiar. I’m sure many like myself have grown up on the Muppets and have seen there share of sketch horror comedy TV. One thing you have to give these guys credit is there ability to produce a horror muppets show professionally and appropriately animated. When the end credits roll by you can tell there is alot of folks involved into the production though I wasn’t sure where this was being broadcasted. I was going to try and summarize the show but I thought the synopsis did just fine for this kind of program.

Now the box clearly states that the series is “not exactly for kids”, though upon inspection that statement may come across more harsh than it really is. For one, they do use occasional foul language and alot of the jokes are more social and maybe evening-comedy-geared but this is no “swim TV” level of harshness either. Perhaps the show is trying to find its base between the 2 but I sort of wish they would have maybe upped the “adultness” a bit more.

The visuals are harmless and present themselves like a classic muppet kids TV show. The content is based around horror characters but more on the Kermit the Frog level than the “viewer beware” level. Highlights for me were in some of the excerpts and bloopers when the crew were fooling about and letting loose. The comedy was dry balanced somewhere between boring and cute.

Though since I know they are working on series 2 maybe its time to ….as they would say “bring it up a notch” so that the adult humor is less conservative and more in your face. For some reason seeing cute muppets combined with dirty humor can be a blast to see combined on screen. Wwhether that becomes reality, time will tell. I suppose this kind of show connects with a certain audience.

For me, I’ve never been able to sit thru a Muppets show or Sesame Street for very long…..so I’m probably not the best suited reviewer for this. The dilemma really is that its too racy for 5-7 year olds which this would appeal to, and its too monotone humor for adults…so that kind of leaves a very small portion of selective audiences. I’m calling this one “Muppets on edge” and sticking to it!