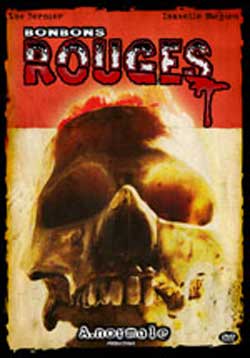 On Halloween night, the rules are simple. House lights bring the kids to get candy. But, when it gets late and really dark, the rules change…

Everyone needs a good Halloween tale. This 45 minute film attempts to capture a bit of that flavor. It seems the writers have a pretty good idea of what Halloween means to them. If not, they surely have a good collection of memorabilia laying around to fill up the intro credits. As the film begins, we come upon a couple who really take their holidays seriously by adding an extra flair to the trick or treating performance. Rising from the front yard, dressed in Michael Myers garb and chained to a tree, Halloween provides a bit of performance art to unexpecting children. Though this begins well, it tends to jump around a bit in its story which almost feels like it should be an anthology but isn’t. The young couple sits down to entertain a lame “zombie-rise-from-the-dead” film, and then head out to find a replacement for the night. In between the boyfriend has some bad dreams that mix with some cheap fx gags. While I really wanted to see this culminate into a smashing ending, I felt that moment never really came…. ending more on an urban legend of sorts. The 3rd act didn’t feel like it was the right call for what started in an almost comedic horror tone. I will say that the voodoo clown towards the end was pretty creepy. I think it might deem more defective seeing him in a standalone piece.

I was reminded of those Tales from the Darkside episodes which always seemed to end on that clever wrap up. The piece has a wrap up, though maybe not the best one. In any case, the effort is still a decent attempt and is better than most shorts I’ve come across. I think with some tweaking and fine tuning on script material this film- making bunch will be more than enough ready to entertain the masses.

I’d have to say, keep an eye on this production as you can feel it leading to great things. Performances, editing and filming were the highlights here with a take away on the premise build.