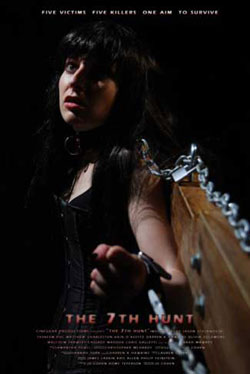 The five victims of the 7th Hunt never knew they were being watched. Files were being built on them, on the eligibility. to die. For the gothic Callie, her deaf sister Ariel, computer nerd Chris, popular girl Sarah, and the bitter misogynist Ricky, their evening plans are about to be re-written. They are kidnapped and taken to an abandoned military training school, surrounded by dense woodlands. Each victim wakes to find themselves the practice victim of 5 sadistic killers, each with their own unique and different style of killing. Their innocent prey must fight for their lives against sociopaths who know their environment intimately, becoming increasingly outnumbered as their friends are killed.

New film 7th Hunt directed by Jon Cohen promotes itself under the tag line of “5 Killers. 5 Victims. One Aim… To Survive”. Surprisingly the film is remarkably intense and viscerally graphic at times. An independent production with a handful of characters build upon the idea of a secret organization headed by an older man who calls himself “Mastermind”(Chris Galletti).

Each of his “killers have alias’s as well. To introduce you to the round of villains, we have “Sniper” (Jason Stojanovski), “The Hand” (Tasneem Roc), “The Knife” (Malcolm Frawley), “The Inquisitor” (Sarah Mawbey), and “The Hacker” (Darren K. Hawkins). Rather than “just” aliases they all have there unique way of killing and torturing. Hence the aliases.

The film begins with a chase in progress and the appearance of the group in which the leader proclaims ” You chose to become one of us, to fight for your life …finish her.” Then of course we get news reveals through title credits that inform us that several have suffered a fate per this organization. From what I could gather this group is paid to assassinate individuals who have wronged others in one way or another. A complex listing of stats, work orders and backgrounds are kept as the group goes about kidnapping and then offing there captives.

Our film victims or targets for better word are all profiled and captured to be brought back to this old abandoned military base. Each target is introduced briefly with a added title card on the bottom screen. Sarah Fairmont, Ariel Clarke, Callie Clarke, Chris Roberts and Ricky Walker. All of them have certain aspects that made them targets in the first place, but we really never get the entire story.

In fact, a few I was really unsure as to why they were captured in the first place. The team of course drops hints here and there but are more or less all psychopaths who were victims at one time themselves. Their trade for life was to join the group and become a killer. Rules of the “Hunt” are stressed time and time again with “you know the rules” comments to remind the killers what there objectives are.

As for talents, each one is named to match his/her talent. “Sniper” loves to shoot guns, “Hand” is an expert of pressure point torturing, the inquisitor prefers props, bondage and slow methods and so on. For an independent release, the acting and filming was professionally done with a story that keeps interest and provides a few thrills. The acts of torture vary in intensity but do the trick when they need to.

I especially liked the Hacker who cuts off his victims fingers and then tapes them up covered in hot pepper powder. Another highlight was “The Inquisitor” who punishes a girl by re-enacting her morbid drawings upon her.

My only frustration was that I still felt like the film was missing some more information in regards to why the organization started, who they are taking orders from and how they became in the first place. Maybe I missed it hidden in some dialog but on the most part that information was shrouded and lost. We do find out that they have been doing this for quite some time and have already exterminated 30 victims to date.

We also see how the operation keeps track of its kills by placing a “pulse” chip in there shoulders to measure heartbeat activity. So it does have a bit of pre-thought out workings that almost suggest some sort of “villain-run” team much like in a comic book. Though that is only inferred and not literal as this is still a horror film of graphic proportions.

All in all I enjoyed what this film had to offer. The film was obviously Australian with some semi-thick accents and was filmed in Sydney and New South Wales. The victims themselves get less dialog on screen so we assume that most of what is happening is due to something they id in the past and are paying the consequences on. For horror fans, there is enough here to do the trick and the story is fresh enough to offer something a bit different. I’d say give it a go for those reasons and hopefully you’ll feel the same way. 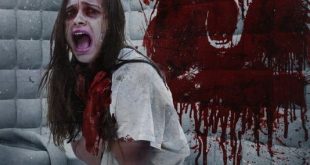