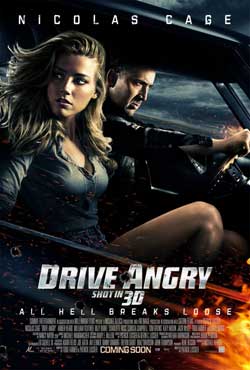 A man escapes from Hell on a mission to rescue his granddaughter from being sacrificed by a Satanic cult.

What is it with Nicholas Cage these days? I know he has had some financila troubles as of late & he might need the money but he seems to have a new movie out every other month or so. And they aren’t the prestige parts that he received after winning his Oscar for “Leaving Las Vegas” oh so long ago. No, now it’s stuff like “The Sorcerers Apprentice” or “Season Of The Witch” or even “Kick Ass” (which by the way really did kick ass). His latest attempt to get on the good side of the movie going public is a 3D film called “Drive Angry”. I wasn’t anxious to see him perform in another tragically bad movie but it was “Shot in 3D” as the ad’s claimed so I figured “What The Heck”.

Boy am I glad I did! “Drive Angry 3D” is one of the most over the top films starring a actor of Cage’s stature in years. There’s simply no other way to say it…”Drive Angry” rocks! It is a literal blast from the past. The kind of movie that might have been made in the 70’s when all the best exploitation films were released. As a matter of fact, it should have been the 2nd feature on the Rodriguez/Tarantino epic “Grindhouse”. Fuck “Death Proof”! This would have perfect after “Planet Terror”. Any movie that features Nic Cage drinking beer from someone’s recently dislodged jawbone is a movie you have to see.

The story you ask? Ok, here I go…Cage plays John Milton, who has just escaped from Hell (That’s right. I said Hell). He has done this to save his infant granddaughter from being sacrificed by a Satanic cult led by Jonah King (Billy Burke). Jonah has no penis because Milton’s daughter bit it off while performing oral on him. She did this because she wanted out & he wanted her & the baby to stay. Of course, he kills her afterwards but that doesn’t get him back his pecker (which is referred to a lot in this movie). Now he has the baby but he is aware that Milton is looking for him so he’s trying to keep the baby away until the new moon rises when he can perform the ritual that will bring “Hell On Earth”. Another problem that Milton has is that Satan has dispatched a bounty hunter of sorts called “The Accountant”. As played by William Fichtner, The Accountant is one of the best characters I’ve seen in a movie in a long time. He deserves his own film actually. The Accountant’s sole purpose is to retrieve Milton & bring him back to Hell, where Satan isn’t too happy that Milton escaped from. Amber Heard plays Piper, who Milton meets at a diner while poring over a map. It just so happens that today is the day that Piper quits her job because of sexual harassment by her boss. She also drives a banging 69′ Dodge Charger which Milton convinces her to use to take him to his next destination. All the while The Accountant is two steps behind them..he can smell Milton, & he knows he’s getting closer to his prize.

Have you got it so far? Did I mention that when Milton escaped from Hell he took a very special shotgun that shoots engraved bullets that seem to have second stages like rocketships do? This is the one thing that will stop The Accountant & Milton isn’t afraid to use it either. The movie is literally non stop from the title sequence on. There is no shortage of blood, boobs & sex here. I was surprised at what they got away with as a matter of fact. The movie has some type of action/sex/violence set piece every 5 minutes or so. In other words, it sure isn’t boring!

Director Patrick Lussier is known to me & to those in the business as something of a hack. His is the name you see following directed by for a lot of DTV sequels or for that matter Theatrically released sequels also. He isn’t a bad director but he has the reputation of a director that will get you a finished product quickly & cheaply. This is the biggest budget I believe he had to work with (50 Million, est.) & he did his homework because every frame of the movie is beautifully shot with vivid colors & none of that “3D headache” nonsense that a lot of us have suffered with while watching a 3D movie (“Clash Of The Titans, anyone)? Th e3D actually serves a purpose in this film. Not only are we immersed in the film visually but we’re in it viscerally as well. A couple of times I was ready to duck when some of those “God Killer” bullets seemed to be headed my way. Lussier co wrote the script with Todd Farmer (who gave himself a hot sex scene in the movie as well) & while it’s fairly rote, it’s never boring. Not for one second did I want to take my eyes off the screen. But the film does seem to be an amalgam of “Race With The Devil”, “The Terminator”, “Taken”, “The Dukes Of Hazard” & any number of films produced in the 70’s. Does that make it bad? Hell no! If you’re going to “borrow” plot points, borrow them from the best.

It amazes me that the whole supernatural aspect to the movie wasn’t being hyped in the weeks before it’s release. When I first saw the trailer for it I was expecting a “Fast & The Furious” knockoff. The powers that be made a BIG mistake with the advertising here. “Season Of The Witch’ (Cage’s last film) had a $10 million dollar opening. He can still open the right movie & put up some good box office numbers. But “DA3D” made only $5 million on it’s opening weekend. A travesty! Un Escandolo!! (Sorry, I got Spanish there for a bit). I really believe this is because people didn’t want to see Nic Cage chasing cars around, although they are admittedly hip ones. He did that movie already: “Gone In 60 Seconds” and that sucked. No, they should have amped up the supernatural aspects of the script. If you’re spending $50 million, wouldn’t you want to make sure people knew what the movie was really about for Pete’s sake?

And the film gets laughs as well. There is a great scene where Cage is having sex in a motel room with a woman but he’s got all his clothes on as she is laying in front of him gyrating & thrusting like a mad woman when some of King’s henchmen pay a visit. He kills them all while still having sex and with a bottle of JD in one hand & a gun in the other, all the while his partner is still f*cking him, he never withdraws from inside her. He just keeps killing people as she gets off. Ultimately he is hit on the back of the neck with a cattle prod & the ensuing electricity coursing through him also courses through her giving her one hell of a good time. It’s a hilarious scene & it’s also a ingeniously choreographed one as well. Very fine work.

Of course I can’t say much more about the film without giving it all away & this is a film that you must see in your local theater as soon as you can because it won’t be around for long & the 3D is some of the best I’ve seen in a motion picture. It’s really almost as good as “Avatar” in the 3D department & that’s saying something. But I wonder why there was such a poor turnout for this film? Is it because of the lousy ad campaign?, Are people tired of Nic Cage? Are they tired of 3D? I don’t know. But I do know that “Drive Angry” is one of the best films I’ve seen so far this year. It’s got tons of grue, gore, nudity, action..oh by the way, the great Tom Atkins has a featured role in it as well. It’s always great to see him in action in any film he performs in.

“Drive Angry” gets a solid 4 shrouds from The Black Saint. I still think that Cage was never that good of an actor to begin with. He always seems to be playing the same role as of late so that cost the movie 1/2 a shroud & the lousy ad campaign cost it another 1/2 a shroud. Those bastards don’t know what they’re sitting on. This movie is pure gold…well, gold dripping with blood & guts off of it anyway (in 3D)!! See the movie & hope & pray that the sequel (which is hinted at) gets a green light because I want to see more of John Milton & The Accountant in action. And believe me, if you see this movie you’re gonna want to see more of them as well. The Black Saint is tired & his chiffon is wet so I am now leaving the building. Do not forget your prayers….