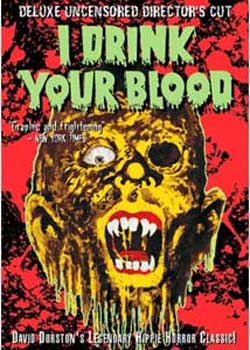 SYNOPSIS:A group of Satanic hippies decide to hole up in a small town. It isn’t long before residents take notice of the group and their deviant behavior. A young boy decides to get revenge on the group the best way that he knows how, by feeding them rabies injected meat pies.

“Let it be known, sons and daughters, that Satan was an acid head. Drink from his cup; pledge yourselves. And together, we’ll all freak out.”

I drink your blood starts off rather quickly by introducing the viewer to a group of hippies. This group however has no interest in peace of love. This group of hippies calls themselves The Sons and Daughters of Satan. In the first scene we see a ritual being held in which the group’s leader Horace (played by Bhaskar) informs everyone that Satan was an acid head and that together they will all freak out.

A young girl named Sylvia happens to be spying on the group of Satanic hippies when she is suddenly spotted. The group quickly captures, beats, rapes, and doses her with LSD. She runs home to her family who happens to be her grandfather (the local veterinarian of the area) and younger brother Pete.

Pete has a run in with the Sons and Daughters when he sees them outside an abandoned house. Pete tries to warn them about the rats that have taken over the house, but the diabolical group doesn’t seem to mind. Instead they have a contest where the person who captures the most rats for their supper gets to lead the group in their nightly ritual. Food of course isn’t a problem to this group of vagabonds, if the rats aren’t enough they can head into town for some meat pies cooked at the local bakery.

Pete of course tells his grandfather about the insanity that he witnessed at the house. Sylvia also soon comes too from her dosing and has a terrible story to tell. Grandpa decides he is going to take things into his own hands instead of calling the law. He grabs his rifle and storms over to the abandoned house that the Sons and Daughters have taken over.

Having seen his sister beaten and raped and now his grandfather beaten and dosed young Pete starts to come up with his own sinister plan for revenge. He takes a rifle out into the woods and shoots a rabid dog. He takes a sample of the rabid blood and then mixes it in with the meat used in those meat pies that the hippies love so much. Thus begins one of the craziest films I have seen.

Soon of course the Sons and Daughters of Satan start complaining about stomach pains and start to act a little strange. They stab and kill one of their own, cutting off his foot for good measure. Then they go out into the small town. One of the women gets gang banged by a bunch of blue collar working construction workers (apparently rabies is spread rabidly through sexual intercourse) so now not only do you have a group of rabid Satanic hippies, you have the construction workers as well.

There are plenty of scenes of violence in this film from a strangely attractive woman slicing off another woman’s hand with an electric knife, a self immolation, and impalement with a sword. However, the suicide by the pregnant member of the Sons and Daughters by impalement through her stomach has left many people turning to me and saying “I can’t believe they showed that.” Well believe it, these rabid hippies and construction workers are unstoppable. That is unless you have a handy water hose available.

The special effects in the film leave a lot to be desired, watch for the severed head made out of paper mache. The droning soundtrack as well had me at several points reaching for the remote to turn down the volume. Like some movies from this era there is scenes of animal violence (a chicken, some rats and a goat) lovers of animals should be warned before even viewing the film.

However if you and your friends are getting together with some drinks and what something strange, something funny, or something that will just make you ask “What in the Hell was that”. Than I highly recommend I Drink Your Blood. 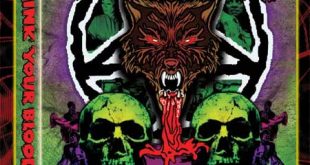