Home | How To Survive A Zombie Apocalypse in Hollywood

How To Survive A Zombie Apocalypse in Hollywood 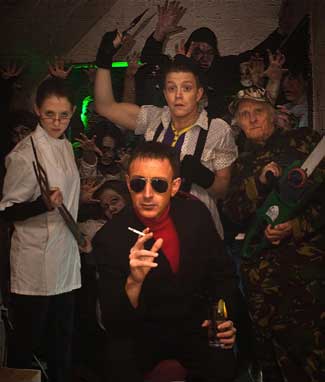 The team behind the award winning, sell out, cult, comedy seminar ‘How To Survive A Zombie Apocalypse’ are about to take their undead expertise across the ocean to LA, where they’ve been invited to perform for a ten day run at The Theatre Asylum as part of their Hollywood Fringe programme.

This fantastic news is just another success in the long line of achievements that this unexpected hit has garnered in the last three years. Including two consecutive sell out years at the Edinburgh Festival Fringe, The Best Comedy Show Award at the Buxton Fringe, A best selling tie-in book (Dr Dale’s Zombie Dictionary), a top 20 podcast series , an iPhone app and appearances on RTE’s ‘The Panel’ and at the premier UK Sci-Fi Convention ‘The SFX Weekender’ where they performed to an audience of over 800 people.

‘It’s just fantastic news and we’re all very excited’ says Ben Muir who plays the zombology guru Dr Dale and wrote ‘The Zombie Dictionary, ‘When we put the piece together and performed it for the first time we knew that we had a good show but we never dreamed that the response would be this great – and it’s even more satisfying when you think that we’ve achieved this success off our own back without the help of any promoters or agents or PR companies. It’s just purely been the hard work of the cast and the support from the great audiences we have, most of whom we still keep in touch with through our sites on Facebook and Twitter. It just goes to show that when sci-fi and horror geeks put their mind to it we can achieve anything!’ 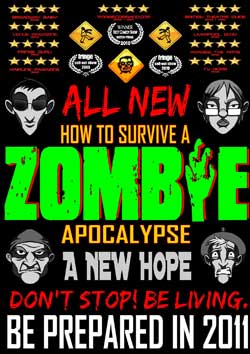 So what’s next for the show after they’ve conquered LA? Well, it looks like things won’t be slowing down for the School of Survival, as later in the year, in August, they’ll be premiering the brand new, third and final instalment of the show ‘How To Survive A Zombie Apocalypse : A New Hope’ back at the Edinburgh Fringe before going back on a third UK national tour and who knows what 2012 will bring? After all – that’s when the world is supposed to end – and who knows – it might be because of a zombie apocalypse – and then they’re services will really be needed!

For more information about the show visit the website at
www.howtosurviveazombieapocalypse.co.uk

For more information on After Dark Entertainment – the producing company visit
www.afterdarkentertainment.co.uk

Tags How To Survive A Zombie Apocalypse