Once my traditional training in art had ended, I no longer practiced the arts which I was taught, and spent several years not knowing what to do with myself. But in 2006 I fell ill with a rare (and under-studied) condition. With encouragement from the artist Rob Lebeau, I looked to art as an outlet for my physical and emotional suffering. Several months into my illness I felt as if I may never be cured because I could no longer afford to see the many doctors trying to help me. I gave up the search for a cure during that time and decided to see if my creations had a place in this world. Bill Shafer of Hyaena Gallery was the first person to take a chance on me. He began selling my work, and I was surprised it was selling. After frequently being criticized for the nature of my work, often discouraged by my family and friends, I had now found a like-minded world of people I never knew existed. 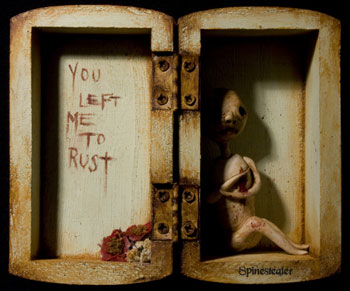 I began creating a medical sculpture series, specifically to pay for my medical bills. After the creation of the third sculpture in the series my condition eased away over the course of several months. Some believe that maybe art was my cure. I’ve conditinued creating ever since, and as of late have become a full-time artist. My intentions are to create work that stirs up emotions. Mainly the work focuses around illness, betrayal, abandonment, or addiction. But I also love to make pieces that disturb others, make viewers uneasy, or question themselves as a humanitarian.