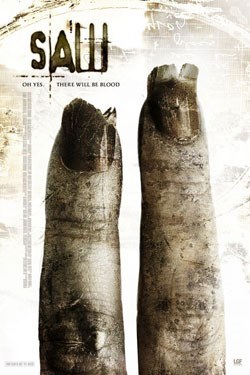 Detective Eric Matthews (Donnie Wahlberg) desperately tries to catch notorious killer Jigsaw in this suspenseful sequel. Jigsaw stays true to his bloodthirsty M.O. of creating devious plans in which people are forced to kill each other. This time, he kidnaps eight supposed strangers and locks them all up in one room, and it’s up to Matthews to find the demented killer before his bloody plan is complete. Shawnee Smith and Tobin Bell co-star.

Hell-o, everyone. He’s back… the serial killer that doesn’t touch a single victim and lets them off themselves. All of the victims have past stories and so does he. John Cramer, Also known as “Jigsaw” has returned with an entire house full of new victims and a well taught student (whom I will not reveal for those of you that haven’t seen the film)… He wants to play a game. Of course I am talking about the second installment of the SAW franchise… and, “Oh, yes… There will be blood.”

I saw this film in the theater and many may disagree with me, but I thought it was awesome. I thought it completely, hands down, blew the original away. The character development and back stories revealed in this continuation were nicely executed as well as the unfolding plot. There were auditory flashbacks from the original, which kept the fans of the original happy. Although, most of the flashbacks were near the end of the film, along with a basic recap (and a little dash of hidden secrets) from this one as well. I will also add that, out of all of the films I’ve seen in a theater, no death scene has received such a standing ovation such as one particular kill shown in this film. Of course I will not give away any spoilers, but you’ll know it when you see it. You’ll probably cheer as well.

Just about every scene of this installment is gripping, from the beginning to the surprising end. The conversations between Detective Matthews and John (“Jigsaw,” played by Tobin Bell) are awesome in themselves. Donnie Wahlberg (Dream Catcher, The Sixth Sense, Black Circle Boys… and New Kids on the Block, haha) did an awesome job as the crooked cop and loving “hard ass” father. I enjoy the acting ability of Donnie and his brother, Mark. They should have pursued acting long before music, both of them. Donnie’s character goes from an aggressive father, to a worried father, to a tough cop wanting answers, to a man breaking down over a missing loved one, to someone reevaluating his own actions… and finally to the violent enforcer of the law that he is best known for. Through most of Detective Matthews’ turmoil of emotion, John stays as cool as a cucumber. He even politely orders Detective Matthews to do him a few favors in return for his patience while waiting to find his son. John is helpless, yet is capable so much damage. The human psyche is really brought to the table in this one, which is another reason I highly recommend it.

Not only did Donnie and Tobin do magnificent acting jobs, the rest of the main cast (we’ll call them “victims”) did as well. I’ve heard some negativity about Franky G’s performance, but I strongly disagree. This was the only film I’ve seen him in and I thought he did great for his type of likable (haha) character. I’ve been a fan of Shawnee since she played Rhonda in Summer School and she delivers a strong performance as well as the rest of the forced house guests.

The cinematography is also very well done. Smash cuts are used heavily as well as six frame per second cutting and scene transitions that have not been witnessed quite like this feature. Every aspect from the (principal) dialog to the cast interaction, the back stories of each character and the reasons why they are victims is brilliantly thought out and put into fruition. There is a sick piece to a twisted puzzle around every corner.

The Special Effects and props are believable to the fullest. Props range from nail studded bats to fake bodies (and some body parts from the original film). Speaking of which, the Gore Score (I-XIII) is a gushing thirteen in this one. There is blood… and gallons of it, indeed. Not only are the kills quite brutal, but the torture (mental and physical, once you discover the back stories of each character) is as well. There are throats slashed, a point blank range eye and brain removal, live cremation, razor slashing (intentional and unintentional), vomiting, vomiting blood, coughing blood and self mutilation. There is gore galore for the fellow hounds out there. I am a stickler for realism though and in one particular scene, something different would have happened if it were actually happening. I won’t tell you which scene, but those who know about pyrotechnics should point out what I mean. Of course the gore is the least of what makes this one of my all time favorite films (especially of the new era in Horror and the soft core direction it has somewhat taken). There are even two mentions of my all time favorite film (and obviously the writers’ as well), The Last House on the Left. Some of the music used was decent. Some sounded like a whacked out cell phone ring tone in the back ground and some I thought was cliché nu-metal, shared in some of the Hollywood Horror of today. Thankfully, there was not much of it.

All in all, this is one film that has heart, brains and guts behind it… as well as spewing blood all over. Another aspect I enjoy about the series in general (or the installments I’ve seen so far) is the characters do not change too rapidly as with the Friday the 13th or Nightmare on Elm Street series (not including the return of Nancy and her father). Much like Scream, there is always something or at least more than one cast member that shows up in the next (in this case, body parts as well), until they die off in the next, if they do so. I guess Friday the 13th can get away with it… New year, new crop of kids. Anyway, I highly recommend this chapter of the SAW series, even over the original. It is a gruesome good time that is non stop action, excitement, chaos, carnage and emotional drama. I give this film, SAW II, FOUR HORNS UP.