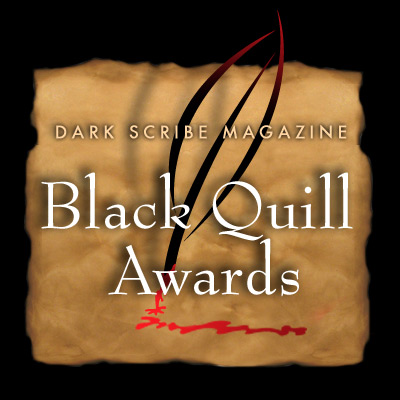 LONG ISLAND, NY, February 1, 2011 — A dark fiction veteran and an acclaimed first-time novelist have taken top honors in the 4th Annual Black Quill Awards, as winners were announced today by DARK SCRIBE MAGAZINE, the virtual magazine “dedicated to the books that keep readers up at night.”

The Black Quill Awards were handed out in (7) categories honoring works of dark genre literature – horror, suspense, and thrillers – from both mainstream and small press publishers. While six of the awards recognized literary efforts, one of the awards recognized book trailer production — a growing marketing aspect of dark genre publishing. Two-time Black Quill Award winners Circle of Seven Productions added a third and fourth award to their tally by sweeping the BEST DARK GENRE BOOK TRAILER category this year with their work on Douglas Clegg’s NEVERLAND trailer.

Nominations for the Black Quills are editorial-based, with both the editors and active contributing writers submitting nominations in each of the (7) categories. Once nominations are announced, readers of DSM cast their votes for their picks in each category. For this year’s outing, more than 4,600 votes were cast by the magazine’s readers. In a unique spin intended to celebrate both critical and popular success, two winners are traditionally announced in each category – Reader’s Choice and Editor’s Choice. Winners receive recognition in DSM, inclusion in press release materials announcing nominations and winners, a virtual icon to be used on their own website, and a handsome award certificate.