If you are a professional website who has reached the level of publishing to hire out an advertising ad service, you may be familiar with the once-noted ad service who has provided much of the movie banner ads you see from web site to web site. They of course are not the ONLY player in town but were at one time one of the best. In fact it was not uncommon for several of the major horror sites to use their services as a strong replacement for Google’s ads who are often hit or miss in providing related content. The idea is simple……connect relevant ads with relevant sites. If a new horror movie is advertising, then let them connect with the target audiences that are best suited for their films. 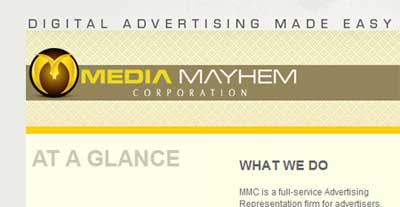 Well, as economy changed, so did interest, players and the foundations from which these ideas are built. Media Mayhem is one such player who had a pretty good run with relevant ads. In fact it was not too long ago they issued a press release on their movement toward facilitating several horror sites with genre content. Then as a good thing came crashing down, their ads began to dwindle. Their service became almost non-existent and the checks stopped coming. (Well if at all)

We were one site who had faith in what they SAID they could do, but became suspicious when we were receiving emails of checks sent and never received, changes in organizational structure (people leaving with no email followups) and of course the obvious failing of related content accounts coming over. As inquiry emails went unanswered  most of the time and promises not met, we eventually decided to look elsewhere for a strong media relationship. At current we are exploring exactly that with new prospects. Though it should be noted that while we thought maybe this was an isolated incident, we began to discover others complaining of the EXACT same circumstances.Forum concerns started popping up, and others seemed to be taking matters into their own hand with public complaints. Still trying to question why instead when, we inquired on missing account records and why we hadn’t received a check in over 8 months. We inquired about common techologies such as “video pre-rolls” and they were answered back with being unfamiliar with the technology. Yet they clearly list it as a service on their front page…go figure..

This kind of disconnection from advertising common place ultimately signaled a failing on their part to keep any sense of competitiveness needed to survive nowadays. To bring this to close, we still haven’t received an account balance closing to date as we look elsewhere.

We issue this release merely to warn others who might be considering their service as an example of what we received. If you are a horror site,media site or related, there are stronger players that can do alot better, have alot more insight and have an accounting system in place while letting you concentrate more on what you do…content. We can’t comment on who all the publishing services out there are for web sites, but we have heard good things about “Indieclick” and  “Gorilla Nation“

If you have stories to share with readers about your experiences as well, then this would be a good place to recommend, warn or discourage.
For now – onward and forward!