Home | Columns | Esoterror Sinema | Would you get ‘Nude for Satan’?

Would you get ‘Nude for Satan’?

This edition of Esoterror Sinema shall discuss the 1974 Italian sexploitation not so classic film Nude For Satan, or Nuda Per Satana if you prefer to sound out something more crème filled cannoli sexy. That’s not an Alfredo sauce stain on my crotch either by the way! 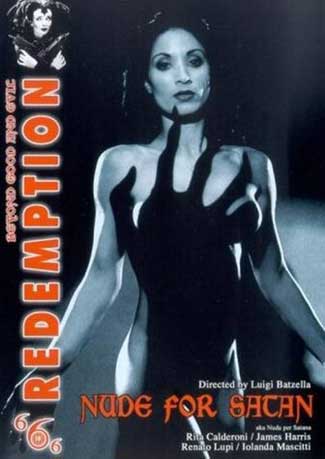 Let’s begin with the basics. Nuda Per Satana originally played in theaters to about a total of 500 people because the rest of Italy was busy worrying about political unrest and what the f*ck the difference was between marinara and regular tomato sauce. 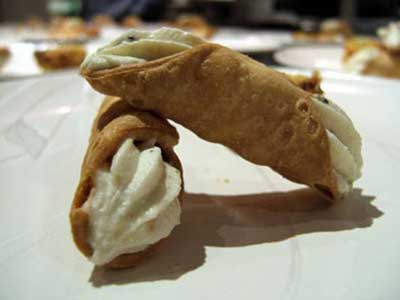 Luigi Batzella, some Italian dude whose name sounds like a gigantic rubber suited monster that doesn’t shoot fire but marinara sauce from its mouth, directed Nude For Satan. He also directed a few other crappy films not worth mentioning so let’s move on. The film stars Stelio Candelli from Demons and Planet of the Vampires but more importantly has Rita Calderoni from Delirium, Black Magic Rites, and The Reincarnation of Isabel. Why is that more important? It’s more important because she gets naked, that’s why. It’s a 1970’s Italian sexploitation film with the word “nude” in the title, did I really need to answer that question? My question would more likely be if it were true that all of these names sound like various Hamburger Helper dishes? 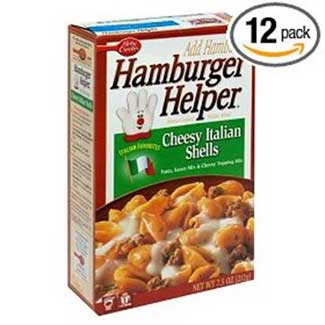 What’s the film about you may be asking? Well if you have already seen it then you are not asking that so much as wondering why the f*ck I am even writing about it but I digress. As much as I HATE to write movie reviews I will sum up the film for the sake of continuity. Nude For Satan is about lots of soft-core heavy bearded clam shot lesbianism, some dude with a big forehead that may or may not be an incarnation of Satan, badly interpreted Jungian shadow psyche mechanics, and did I already mention all the chicks in sheer lingerie popping out of coffins and running around a creepy castle? Oh and it has a lot of 1970’s sexy naked chicks…in… case… I… did… not…focus on that part already.

My expectations were high because within the first two minutes of the film we see a chick running through the woods at night in nothing but sheer lingerie. What it had to do with the plot I still am not too sure because all I really cared about was the fact that some chick was running around the woods half naked. As the great Otis Driftwood once stated, “I keep my standards low so I’m never disappointed.”

More stupid stuff happens in the castle but all that matters was the lesbian erotica and the naked chicks in lingerie. Did I mention that already? The greatest scene in the film I must say involves Rita Calderoni when wearing black lingerie falls into a giant spider web. As she is stuck in the web, a spider that looks like a big squished burnt brownie with pipe cleaners for legs slowly crept up her flesh. As visually hilarious as that was I strangely found myself wishing I were a big squished burnt brownie spider with pipe cleaners for legs.

So my dear readers, as this column deals with the examination of genuine occultism within horror film, just where does Nude For Satan contain actual occult natures? Besides the word “Satan” being in the title is really does not represent any genuine occultism. I know that’s very sad especially with all of the lesbianism and chicks in lingerie. With my over 20 years of studying and practicing of various occult traditions I must state that there really should be an occult tradition revolving around chicks in lingerie!

Within the film there is an old big book that presumably is the grimoire of the cult residing in the castle. Sadly the only exposure of its contents we receive is the single verse of “he who made a pact with him belongs to him”. We do see a couple of cheap medallions in the film that have something to do with the whole split personality/doppelganger aspect of the plot. There is in fact a large degree of esoteric significance to the natures of twins, as well as doppelgangers, in occultism but they are irrelevant to the context of the film. Besides the obvious zodiacal twins, amulets dealing with twins have nothing to do with the plot of the film. Babylonian and Assyrian amulets exist depicting twins but they deal with overthrowing evil forces and not summoning them. Although I believe the Olsen twins are a possible embodiment of evil, just evil with eating disorders. Other amulets exist in other cultures dealing with twin/dual forces but none to my knowledge deal with summoning Satan into weird Victoria’s Secrets orgies. Again, it’s a very sad occult statement.

So what does anything in Nude For Satan have to do with Satan? Besides the over simplification that lesbianism, illicit fornication, and sexy chicks in sheer lingerie are sins and thus “Satanic”, the film does not really represent any actual Satanic anything.

The biggest question that the film Nude For Satan raises is does one really have to be nude for Satan? 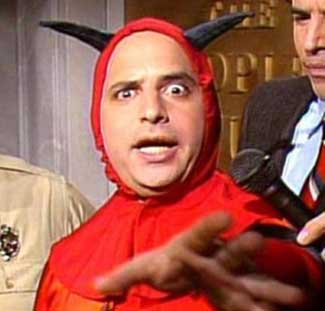 I guess that question all depends upon whether Satan really does look like some fat dude from Saturday Night Live or if he is in fact a she and is Elizabeth Hurley.

Although the Prince of the Powers of Air more than likely has the ability to morph genders like an infernal transsexual, that’s ok. If Satan looks like Elizabeth Hurley for the duration of my playing in her Hellfire funhouse I really don’t care if she is a dude 364 other days of the year. Does that make me sound sick? Out of sight out of mind I say. Well except if she is just tucking her ball sack then that may be a problem! 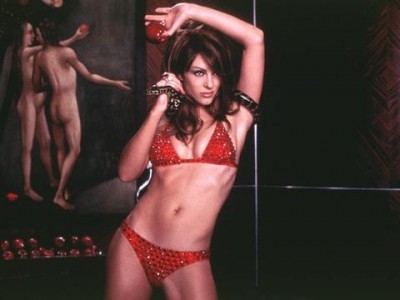 So my dear readers we come upon the end of the article. I know you feel more enlightened for reading it. Either that or simply more confused. I would recommend Nude For Satan not so much for cinematic inquiry into the occult because you are too lazy to actually read an occult book, but for another reason. Nude for Satan or Nuda Per Satana is worth watching if you desire to lose an hour or so of your life but gain a glimpse of 1970’s vaginal clam shots…and sheer lingerie! 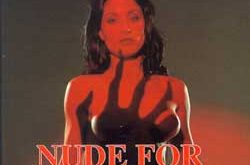