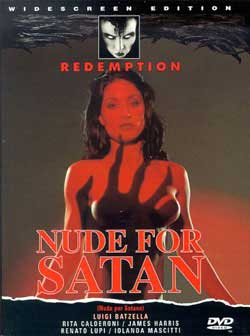 While driving through the countryside late at night, Dr. Benson finds a crashed car with a young woman hanging out of it. The doctor puts the girl in his car and drives for help to the nearest house, which turns out to be a mysterious castle. He is greeted at the door by a woman who looks exactly like the woman from the car, and she invites them both to stay for the night. The doctor soon discovers that his host is not the only one in the castle, and that this beautiful woman is concealing a terrifying secret.

I put the film in, closed my eyes and dreamed this eerie surreal dream called “Nude for Satan”. This is pretty close to what it feels like watching a film like this. Rich in European cinematic’s, eerie characters and a plot that swirls back and forth with a numbing experience that defies most of what you are used to seeing.

To add credibility the first scene up is a nude women running towards the screen in all its dreamy glory. Then the film begins. A traveler by the name of DR. William Harry Benson encounters a women in the road who appears to have been in an accident. Concerned, he seeks out the nearest location which is this castle like building nearby. A gate man directs him and then disappears. The door opens and no ones there. Then in asylum funhouse style, he opens doors to find acst of weirdness behind each one. The girl in trouble goes by the name of Susan. She is left in the car while he seeks help. Ok so there is the facts for the first portion…but theres more

At this point you may be in the loop but it quickly falls into a confusing, surreal and numbing experience as you try and stick with a dream like narrative. So in the interest of writing a review that would make sense it took me a few viewing’s to really get to the bottom of this story.

As you will notice, the man who gives the DR. directions, then the man whom he greets at the gate and finally the one who acts as the host of the castle are all one in the same. The difference here is what happens after the accident. It appears that the DR has stepped into not reality but a time hole, parallel universe or whatever you’d like to call it. For the record it’s a dream that occurs the moment of the accident. In his encounters at the castle he is greeted by another version of Susan who calls herself Evelyn, paintings seems to take on there own life and the staff and host seems to be of the evil nature. Susan awakes and follows in similar suite. First she seeks help, then sees Benson in another form who calls himself Peter and all the while gets the impression that not all is what it seems. A mirage as they call it in the film.

The 2 encounter both pleasure and horror as they run into nightmare scenarios. These include a lady being whipped to death, a spider web (with a really cheesy spider), a ritual involving naked folks and a bit more to follow. Concubines dance around nude, men dance around half painted and all the while our devious host rambles about a power trip with AshaTharoth. Our host by the way, we assume to be either some form of demon or Satan himself though the only mention he gets is the one called “HIM”.

I guess this film falls into many of the categories of the early film sleezpotiation but in its core its something quite original and disturbing. I couldn’t shake the dream quality I was getting as odd characters just seemed to appear in different acts of the film. Subtitles were necessary in this visual mind f%$% of sorts. By the final frame of the ending you know why this all occurred so your trip was not just a variant of visual screen acid trips.

A film like this is hard to categorize as good or bad, it just is what it is. I do appreciate the strange narrative even though I had to revisit it a few times. This is pretty close to classic Italian weirdness as you’ll find. The title is a bit of a throw off but it gets you in the door. Alot of self awareness, evil and the after life are explored in the thin idea of a plot. Though I think if your going for a mind trip, this is one way to present it. Clues are given along the way that your not in Kansas anymore so I think director Luigi Batzella really knew where he wanted to take us in this one. Give it a whirl when your fully awake it has classic supernatural written all over it. It’s value is in it’s originality however weird it may be. 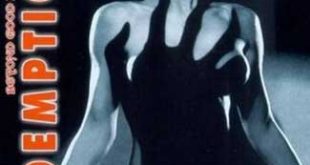 Would you get ‘Nude for Satan’?