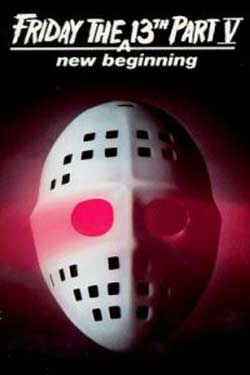 Surviving the tragedy of the fourth film and dispatching Jason once and for all mentally unhinged poor Tommy Jarvis, it is because of this he is made a ward of the state. Now a teenager the very unstable Tommy lives day to day and bounces from halfway house to halfway house. When bodies begin to pile up and Jason once again seems to be on the prowl the only person with any answers is Tommy Jarvis.

Say what you will about part 5, yes Jason really isn’t in it, yes it takes the already shoddy continuity and sh*ts all over it, and yes there are some great gory moments that ended up on the cutting room floor, but despite all of that its tons of fun. I could do another review but really I’m beginning to think I’m spinning my wheels in the mud, everyone including my grandmother has seen these movies and if you’re on horrornews.net you defiantly don’t need another plot run through. Instead I’m just going to rap a little about what makes this movie great.

First of all let me get something out of the way. Yes this is the movie where we get an imposter Jason, Roy the paramedic. But for the most part there is almost nothing that separates real Jason from fake Jason. They both look the same, they both act the same, it’s just in the end one turns out to be a paramedic driven mad by the death of his son. I also speculate that if this movie takes place in Crystal Lake Roy had been picking up the bodies of Jason for years now and that probably didn’t help his mental state. There is no difference between the two here ultimately so it might as well be Jason Voorhees.

Now moving on, this movie is full of laughs. Like most Friday the 13ths the laughs are unintentional but still it’s funny each and every time. Right from the start this movie cracks me up.

First of all why in the f*ck would you bury Jason wearing his f*cking hockey mask, and in a shallow grave no less. I mean they practically treat him like a pet hamster that died complete with a 2 dollar drift wood headstone. Whats worse than that is two 80’s party dudes come and dig Jason up just for the hell of it. Really what do you get from digging Jason up? You get killed apparently. But really that doesn’t matter because later in the movie they tell you he’s been cremated to further confuse the hell out of you.

The laughs in Friday 5 come mostly from the characters. I don’t know if it’s because they don’t hold up 25 years later or because they are all in some odd way hilarious, either way they each have something that is just f*cking funny. Be it a stutter, a robot dance, or a candy bar, regardless this cast of characters is the best set of arch types yet.

Joey: The hilarious semi retarded fat guy who can work wonders with a candy bar. Nobody in the history of cinema did as much as Joey did with a Mr. Goodbar. He manages to piss off an entire cast of characters and get hacked to pieces in 2 minutes all because of a candy bar that somehow looks like sh*t when he’s holding it.

Vic: I don’t know how having a guy who loves axes so much around other people who are a little bit screwy is a good idea but what ever.

The two greasers: Seriously peoples dressed like that in the 80’s? I love the guy who insists on singing “Rat-a-tat-toue” while he sh*ts.

Raymond the vagrant guy: He serves no purpose at all, it’s like he jumped off a train car and wandered into the movie, and just as quick he gets killed.

Lana and Billy: What Lana sees in a balding douche with a bad moustache and a coke problem is beyond me. And apparently bras aren’t required for being a waitress in Crystal Lake. I love the scene where Lana gets a false scare via a cat jumping out at her, its funny in that clearly someone off camera gets a little over zealous when throwing the cat because he flies across the room and slams into a wall. Funny sh*t.

Tommy Jarvis: Tommy is so tightly wound in this you couldn’t pull a pin out of his ass with a tractor. The moments where he explodes and beats the f*ck out of people are great; I just never get how he doesn’t beat the sh*t out of fake Jason.

Tina and Eddie: Awesome eyeball related kills, and Eddie plays a great asshole. Now my question is, what’s the appeal of f*cking in the woods, I don’t know about you but the idea of bugs crawling up my ass for 2 minute movie sex makes no sense.

Demon: Oh my god Miguel Nunez I love you. The enchilada eating, pipe laying, guy who lives in a van. I love how he has all sorts of odd food in his van, egg roles, pizza, taco bell; it makes no sense why it’s there or why he offers it up, but f*ck its funny. Whats even funnier is how quick those enchiladas shoot through you. Demons sh*tter death is a classic. What is it with this movie and people singing while they sh*t? “Ooohh baby, ohh baby”

The kills in this Friday are great but the camera cuts away just before things get juicy every time. As much as I would like to blame the producers it’s actually the MPAA being assholes. I hope to god the upcoming special releases have the scenes extended again because it’s probably the films biggest flaw in my opinion.

If you want to laugh more than you have in any other Friday the 13th check out part 5.