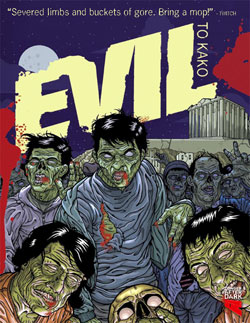 Today, the streets will be bathed in delicious human blood as a plague of walking undead invade downtown Athens. It’s up to a group of random strangers-including a wise-cracking cab driver, a teenaged girl who just lost her parents, a tough-guy soldier, a tougher young woman – to save the day as the flesh-eating hordes sink their teeth into fresh meat.

Drenched in blood-soaked action and complete with exploding heads, flying intestines and more household object impalements one could desire. Evil delivers the goods and satisfies the inner gore-hound in all of us while delivering twisted, wry comedy in the tradition of Peter Jackson’s Dead Alive and Sam Raimi’s Evil Dead trilogy.

A zombie film from Greece? I’m excited already… so in it goes subtitles and all. Actually I’ve been putting this one off for a long time, but glad I finally gave it a whirl. From the start, we are presented the titles as they play nicely over a time lapse of the sunset while 2 figure stand in the background. Actually I’m assuming they were cutouts, as no one can stand in one place for 24 yours without moving. Nice, but odd. Right away a group of surveyors find a cave through a hole in the ground. From there they investigate and suddenly are approached from some unseen force. Cut to a day in life. The surveyors are out and about doing there business when midday a evil transformation comes over them and bang….here come the zombies!

You really got to approached foreign films that take on genre trends. For one its not like being in Kansas, and 2 your gonna get a different take pretty much no matter what. A zombie body flies across the street and hits a car into he background…bravo! clever and kind of hilarious. As the film escalates, we fall into he fight for survival mode complete with nomadic survivors that meet, plot, plan and question the state of things. Though in that process one of them actually gets in a fist fight with one of the zombies. Well its pretty one sided, fist vs. face…but you don’t see a zombie slugging all that often..its usually a gun or axe to the head. My guess would be avoiding getting zombie face on your hands. This movie pretty much breaks all the rules of Zombie-dom. Maybe I should clarify and refer to them as infected humans, however many scenes suggest that they are pretty much zombies as in re-animated dead folks. Now i know only us movie geeks will really buy into the details but its still fun to mention.

Apparently some zombies can be killed with a lame karate kick which is executed more like a soft ballet. In other scenes, a shot to the chest does the trick or a knife to the eye. Though this confuses the rules a bit as we see scenes where half dismembered bodies still crawl towards there prey. So this asks the question …..if a shot to the chest kills them, does cutting the body in 2 not? It’s ok, there are several zombie flubs like this thoughout.. too many to mention really. In a comedy scenario this would work, though “Evil” is not intended as comedy. So word to the viewers, don’t over analyze or it will spoil the fun. All in all this film was basically a set up to create some flesh easting zombies. Even the cause was a bit of a mystery..though the film doesnt dwell on that and just gets on to zombie killing. There’s alot of a meet new folks and die situations though out. So characters never entirely receive major focus. Theres a pretty funny scene that involves feet licking that gives soem occasional comic relief.

There is also alot of run, stop and rest, run, stop and rest movement in this film. The fun lies in the zombie battles, which are pretty gory, brutal and involves alot fo head chopping. The story is set to be pretty simple, which is a chase from zombies. I think common sense would have suggested to just all pile into a car and drive to the country…but then that wouldnt make for much action would it?

While there isnt much to give away as far as spoilers, I did like the ending shot which was a nice pullout shot bird’s eye view..most likely done with a helicopter. A definite money shot that you dont see in every film because of it’s cost to shoot it. It’s shots like these that give i”Evil” it’s extra appeal

An interesting zombie film from Greece…what more can you say. I did enjoy this and would watch it again. Zombie purists will spout off wrong-doings…..and complain…but hey they can always stick with Romero in that case. Available from TLA