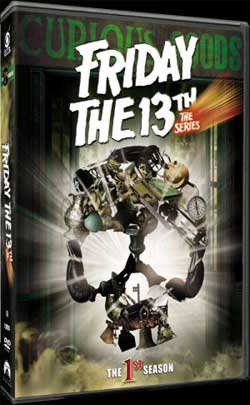 Unrelated to the classic horror film franchise, this series revolves around cousins Ryan (John D. LeMay) and Micki (Louise Robey), who inherit an antique shop from their Uncle Vendredi and soon find that, due to their uncle’s pact with the devil, the wares are all cursed. Now, with the help of Vendredi’s business partner, Jack, the cousins must track down the jinxed antiques before their new owners use them for sinister purposes.

“Louis Vendrodi made a deal with the Devil, to sell cursed antiques, but he broke the pact… and it cost him his soul. Now his niece, Mickey and her cousin Ryan have inherited the store and with it, the curse. Now, they must get everything back… and the real terror begins…” Anyone remember those famous opening words? I for one recall them quite clearly. I use to watch this series every premier episode since the very first. The way I got into it about a year before it aired was an old ad on MTV news that said they were making a Friday the Thirteenth: The Series.

They advertised with a logo that was identical with the film that included our hockey mask wearing, ax wielding psycho with a home garden and home appliance induced body count. Naturally, I had to check it out. To my somewhat dismay, upon the virginal viewing, it had as much to do with Jason Voorhees as Halloween III: Season of the Witch had to do with Michael Myers… None at all. My dismay turned into curiosity, so I gave the debut episode, The Inheritance, a watch. For some strange reason, the the curiosity was now full blown addiction. I did not and could not miss a single episode. It had the effect on me that Tales from the Darkside did from the very first encounter. This was nothing like the movie, but stood on its own as a good series. If you are expecting to see Jason hack victims up in the woods (and will have a sense of disappointment if you do not receive such) of Crystal Lake, do not watch.

The recital of the introduction explains the general plot, which differed with every following episode. Of course, some were better than others, but overall… The series was hidden jewel in the vault of televised Horror programming. To me, it was right up there with The Twilight Zone, Tales from the Darkside, Amazing Stories, Ray Bradbury Theater, Alfred Hitchcock Presents or even Tales from the Crypt or The Hitchhiker (minus the theatrical additions of language and graphic violence… which it did not need to work on a successful level).

Although each episode differed, they kept the same basic theme. Micki Foster (played by the irresistible red head, Louise Robey, who went by simply “Roby” on screen) and Ryan Dallion ( played by John D. Lemay, who was later given a main role in Jason Goes to Hell, with the memorable line“Fuck that, I’ve got a gun”) had to retrieve all of the cursed antiques that their Uncle Louis had sold during his lifetime of peddling for the Devil. They soon meet (within the first episode) Jack Marshack, who becomes their elder guidance. He was once the former assistant of Louis when he was still alive.

Some memorable episodes included Doctor Jack, about a scalpel wielding Doctor. Some helpful usage of combat intended heart jumpers saved the day in this monumental episode. Another one was Scarecrow, about a scarecrow that came to life to life with a cursed cycle. Another episode about a cupid statue, entitled Cupid’s Quiver, also stands out along with many other classically aired episodes of a now televised monumental piece of Horror. This, in my opinion was more appealing than the Freddy’s Nightmares series(aired between the times of Dream Warriors and Dream Master), which brought Freddy Krueger (still played by Robert Englund) into our living rooms once a week.

The entire series ran from nineteen eighty seven to nine to nineteen ninety. During the later half, Steve Monarque took the place of Ryan’s character as Johnny Ventura. Personally, I was use to Ryan by then. The good thing is, “Robey” stayed on as Micki until the very end. All in all this was a rare commodity to the televised Horror genre of the late eighties. It is about time this sees the light of a release in which it has been deprived of for so long. I give this set, Friday the Thirteenth: The Series- Volume one FOUR HORN UP.

Until the next time, this was Jay… Keep one foot in the grave, one fist in the guts and your eyes out for gore. Later.