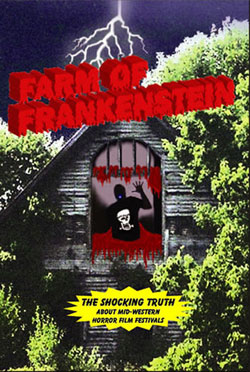 Hey there horror fans..this ones for you. Or maybe for you who aren’t horror fans yet and want to know what goes on behind the scenes. No not Wes Craven’s dressing room…but something far more strange and surreal. Yep, I’m talking about the self release of “Farm of Frankenstein”. This obvious fan release was produced, shot and edited for the benefit of showing us what goes on at these so called conventions. Well there are plenty of items being hocked thats for sure..however there is a culture within the culture that is as close as seeing adults get handed a candy cane covered in Freddy Kruegers spit as you can get.

In fact, the draw is the fun and definitely different agendas that go on in conventions. This film was crested to showcase a few of those. A few attending fans edited up a bunch of showings into a rather condensed and special version to show you all a bit of the horror fandom. The creators behind this one includes director Rick Washington who appears as himself and his 3 fan cohorts Dan Mapp, Craig Shaner, and Mark Sheibenberger

You’ll see guests both old and new…mostly from older films as the new stars are sometimes far harder to book for these turnouts. You’ll see a few returning faces, and stars of films long past and you’ll even see tributes provided with oddles of talent behind them. Though don’t stop there! – there’s some weird sh*t that goes on in the form of dress up, costumes, talent shows, entertainment and wacky folks just getting there groove on convention style. The footage is shot SD from what I could gather and edited with some quirks along the way to spice it up. Long hours, leery worn faces and a spark of …..hey that’s that guy from… is all there for you to see.

The sellers sell their goods that most of us wish we owned. The celebrities are brought to tables to sign autographs and sell some photos as incentives. And the fans scurry about showing love in the only way they know how. To ask questions, purchase, take photos and enjoy themselves in the glory of the day.

For conventions, there’s several if not maybe a 100 of these kind of gatherings held all over the country. If you happen to be lucky to live close to one its a fun weekend. If you happen to not, then book your tickets and fly in for one. The purpose behind this and the film itself is to show how the horror generation is supported and loved over the years. Even films like “Last House on the Left” are presented with the talents much older now talking about the old days an filming this controversial winner. Sid Haig, Bill Moseley, Michael Berryman…and many others rally out for appearances and to maybe announce there latest features. What viewers may be surprised in is that it seems that the age groups that attend these are more in line with adult crowds than young teens who happened to just catch the release of an old gem. Not only that, but something about these brings out that teen in all of us and is released in full force on camera.

Farm of Frankenstein is not a professionally shot release but it is a unique and focused release that could of been easily been compiled from fans camcorders across the world. The fact is, these folks have spent the time to put one together that shows alot of love for the genre and should be treated as such. If you want to help support them and maybe pick up a release go ahead on over to farmoffrankenstein.com/