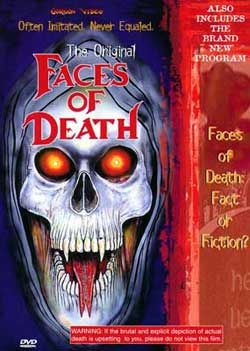 A rite of passage of sorts to gore hounds everywhere, Faces of Death is the footage collected by Dr. Francis B. Gross of genuine deaths. He hopes that the viewer of his collected footage will gain a better understanding of the life that they live.

“Watching this man in his last moments of life I began to feel guilty. True, he had committed murder, but wasn’t there some other alternative?”

When I look back on my childhood there are quite a few moments where I actually frightened my mother. Some of them involved questionable music that was out at the time, and there was of course my obsession with the horror genre. I had a group of friends, who were just as sick as I was in middle school and just about everyday we would tell stories of the movies that we had seen. There was no movie talked about more back then in those discussions than the one and the only Faces of Death.

I had first heard about the film from my cousin. He told me about it in a hushed voice so that my grandmother wouldn’t hear. He told me about a movie where you actually get to see people die. “This guy gets the chair and blood comes out of his eyes!” No image on celluloid could ever compete with the image that popped into my mind. Immediately on our next trip to the video store I sought out the title, but alas it was checked out. Good lord look at the artwork on the packaging up there. First what my cousin had said and then the cover art, I had to see this movie.

My mother put the title on the hold list and low and behold a few weeks later it was in. This was great, I was about to witness what could possibly be the scariest movie I would ever see. Halfway through I was left with a “what the …..” feeling. By the end of the movie my mother proclaimed “that was interesting”, she put the movie away and I wasn’t allowed to choose a movie for a couple weeks.

Faces of Death is pseudo documentary film which follows Dr. Francis B. Gross as he shows us images from his personal stash of death. Most of the deaths involving humans in the film are of course staged; some of it is blatantly obvious. While most of the animal death scenes (slaughter house, pit bull fights, seal clubbing) are real, to the best of my knowledge, so again animal lovers this isn’t your kind of movie.

Among these supposed deaths there are two that I rather enjoy, both involving animals. One of the deaths involves an alligator that kills a wrangle who is trying to capture the beast. The other portrays a man being attacked by a bear. The bear attack on in particular is pretty damn funny, and was the most talked about scene around the water fountain when I was a child.

There is of course the scene described to me by my cousin, actually there are two scenes involving capital punishment. The first of the scenes involves a man getting the gas chamber. The criminal attempts to hold his breath but eventually falls prey to the toxic gas. The second of course is the infamous electric chair scene. Yes there is blood coming from the eyes, but they are bandaged up. My cousin had lied to me, it would be much later when I discovered Fulci that I learned how fun eye violence could be. 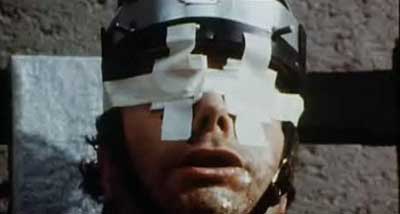 One of the most infamous scenes involves a group of four nicely dressed diners in a restaurant. The four are about to dine on a local delicacy, monkey brains. The monkey is put into a hole in the middle of the table with only its head sticking up out. The four around the table take turns clubbing the monkey with small hammer like instruments. After successfully clubbing the animal to death they begin to remove and eat the animal’s brain, believing that it will bring them closer to God. Oh yeah the entire segment is staged just so you know.

Really the only true horror segment of the film involves ghost hunters examining a house for the presence of a ghost. They use really scientific methods, like flour on the floor to capture “ghost foot prints”. What’s even sadder than reading that statement is they actually show footage of the flour with footprints in it. 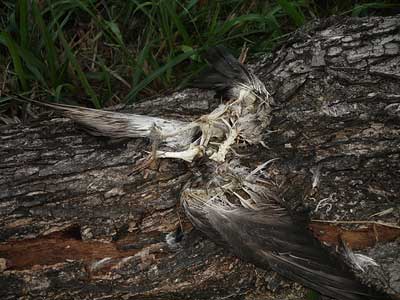 By today’s standards Faces of Death might seem pretty weak. We are talking about a generation now who was raised on the internet where sites such as Rotten.com and Ogrish were the outlets to the images of real death. Peta hands out DVD propaganda with worse footage on it than what was collected in this film, and the news shows more violence today than ever before.

When the film hit mom and pop video stores in the 1980’s however it was a totally new story. Most of the cast and crew on the film weren’t in unions so their names weren’t even listed in the credits, which lead to the believability that what we were seeing on our televisions at home were the real deaths of human beings and animals.

Is the movie entertaining? It isn’t entertaining; it’s a rite of passage. If you haven’t seen this film yes what are you waiting for? Don’t feel too bad if you can’t stomach it though, you are after all only human. Watch Dr. Gross’s Faces of Death, and let’s see if you look at your own life the same way. 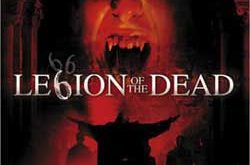