If you were to take two of Nicolas Cage’s previous films and smash them together to make another film then DRIVE ANGRY would be the mutant offspring of GONE IN 60 SECONDS and GHOST RIDER. In this film Cage plays Milton, an angry soul that escaped from Hell and is driven to hunt down the men who murdered his wife and kidnapped his daughter. But it’s not all fun, games and running people over, Milton is also being pursued by one of the devil’s minions named The Accountant, played by William Fichtner, who is intent on sending Milton’s behind back to the fiery slammer where it belongs. DRIVE ANGRY also stars Amber Heard, Charlotte Ross, and Billy Burke. 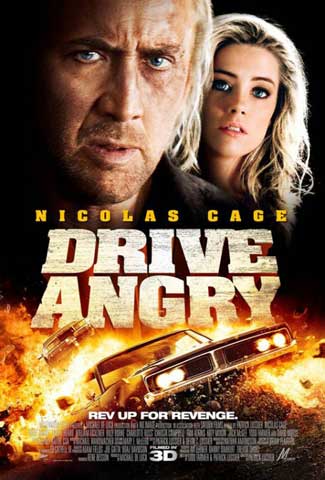 Synopsis:
“Drive Angry stars Nicolas Cage as Milton, a hardened felon who has broken out for one last chance at redemption. Hell bent on stopping a vicious cult of fanatics who murdered his daughter, he has three days to stop them before they sacrifice his infant granddaughter beneath a full moon. Milton must us his anger to go beyond all human limits in order to save his last connection with humanity.

He’s joined by Piper, a young sexy-smart waitress who liberates her ex-boyfriend’s cherry red muscle car in order to help Milton. Now, the two of them are hot on the trail of the charismatic Jonah King and his murderous followers. King will throw every one of them faithful under the wheels of Milton’s turbo-charged Black ’71 Challenger, to fulfill hist destiny and unleash hell on earth.

But the bloodthirsty cult is the least of Milton’s problems. The police are after him, too. And worse. An enigmatic killer known only as “The Accountant.” The Accountant knows what Milton is trying to do and simply doesn’t care. With wicked cunning and hypnotic savagery, the Accountant will relentlessly pursue Milton at high speed across the forgotten back roads of the American south. Fueled by high octane and pure rage, Milton and Piper must battle the onslaught of King’s disciples, avenge his murdered daughter, and save his granddaughter before his last chance at redemption is revoked.”