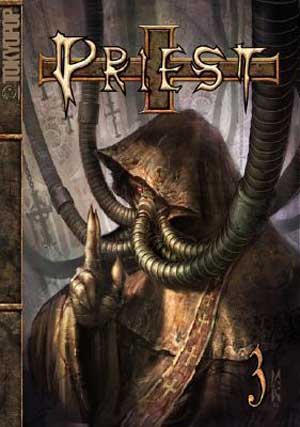 “While railroad men and pioneer familes expand into the frontier of the old west, a secret war is being waged between two factions: the followers of Temozarela, an angel of blood fallen from Heaven, and those who stand against the darkness he represents. Temozarela’s cult spreads plague in its wake as it attempts to pave the way for its master. The agents of righteousness face the scorn of Christians and heathens alike in their secret mission. And somewhere in between stands Ivan Isaacs, a priest who sold his soul to the devil Belial for the power to fight the darkness. Both sides need him to reach their goals, but Ivan has plans of his own.“

Artwork: 3.5 out of 5
Not being too much different than previous volumes, lends to the overall appeal of a long running series like this. Once again we are treated to black and white pages, this volume however moves from the monsters to the creepy feel of how a demon is living. Nice shading and solid character designs help distract from the major downside, the lettering. It’s not that it is all bad, but they seem to give the demons and monsters their own unique fonts, which can be good, but these border on not being legible at times. I would give this a solid 4 but not being able to read some portions really takes away from what is going on.

Story: 4.5 out of 5
I may have made the mistake of starting to read Priest and Hellsing at the same time. While the idea’s are somewhat similar, monster hunting, the execution and plot are different. That being said I have felt that what Priest was lacking was good story depth. Then I got to Vol. 3. While it starts off like the 2 previous volumes, this one dives deep into what is going on and then throws you for a loop as it jumps ahead to the future. I couldn’t believe the huge twist as I was really wondering if I would continue on reading this series, and now all I can wonder is when Vol. 4 will come in.

Dying Breath: 4.0 out of 5
The previous volumes were good, but nothing spectacular, then Vol. 3 came along and shook up the dynamic of this series. While I found faults in a few phases of this volume, I found that the whole was very good and very interesting at the end. I still don’t know if I would say that I prefer this one over Hellsing but if Vol. 4 can add more to what I just read, it’s going to give it a great shot. Take a chance and check out this book, you might be happy you did!

If you would like to buy or know more about Priest Volume 3 please go to www.tokyopop.com.