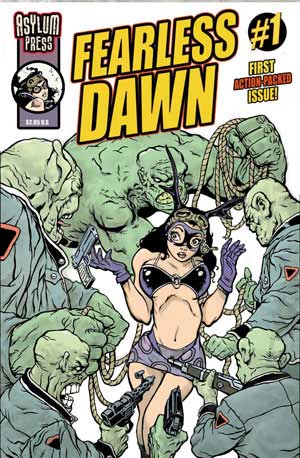 Get ready for the chick with beauty, brains and a killer set of moves …none other than Fearless Dawn. In this first action pack issue we get to see Fearless in full color. You may have remembered her appearance in the TPB “The Bomb”, but I have to say full color version rocks ass! illustration work is handled by the creatively articulate Steve Mannion who graces us with extremely well done detail pen work and “Mad comics” style coloring. Also let’s not forget that the story was also written by Mannion which combines comedy and action into one hot blooded chick femme fatale.

In similar fashion a other Mannion works, the villains are mean , muscular and larger than life. Plenty of “Fwips!” “POWs” and “Baffs”, the heroes take on the bad man and kick ass while getting ass kicked. Dawn not content to sit around, has got herself in a bind by single handily attacking a drug operation that creates drugs which create monsters mentally and physically. The target? Manitoba sector, the drug? Aggro”…cool eh!

Anyway after getting captured she is aided by an agent from the Syndicate that calls himself “Seven”. While fast, strong and clever, “Seven” is no match for the chemically polluted nazi monstrous man beasts that await him. Fights break out and “Seven” is pummeled pretty hard. Though Dawn has a plan that only keeps you anticipating the next dynamic issue. A fun read with fun characters. The issue is marked 1 of 4, so you can count on 3 more issues of this adventure. I for one love these violent little gems and the classic era presentation of the hero. For this issue and many more great reads stop by the Asylum Press factory and pick some up.