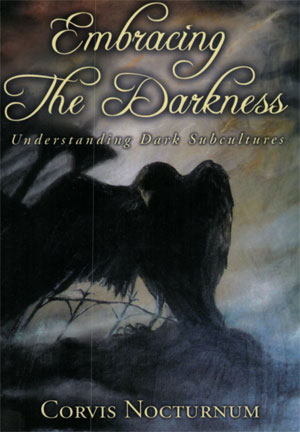 Making the assumption that this was a “how to be a Goth book” would be a mistake. Why I say this, is this book is much more than that. Author Corvis Nocturnum is no punk kid with a desire to see himself published. He writes with intellect and style that translates the gothic and dark cultures like no other. Having lived the lifestyle, participating in the culture and embarking on creative journeys himself, Corvis has no trouble separating facts from fiction down on paper. As a reader, I often wondered myself what constitutes a Goth and not. Where it came from? Does it matter and what separates Goths from artists and fashionable persons who like dark clothing? What a relief to find that there is alot of substance to the falsely played out media version. Gothic culture is real and has real origins. This underground phenomena is more than just that. It’s a vast array of contributions artistically, religiously, musically, and literally. This collaboration is what defines a large part of our creative makeup and that’s what makes this book so appealing.

A nice introduction is presented followed by a trip down the memory lane of gothic origins. As expected it did start with European origins with a early gathering of traditions, romanticism and philosophies. … Though these are just some of the facts you’ll dig into along the way. It’s also no surprise that many of these trends broke off into subsets of variations on the themes. Goth happens to be one that breaks off into many sub classifications.

To give us the full overview of gothic culture, Corvis has presented many examples of professionals and artists in the gothic scene. With a culture that is diverse in many ways, it would be harder to categorize it without variations of artistic contributions and the individuals. Each feature contains an interview with a noted or well known person/s that pertain to the subject at hand. Not only does the research given help better explain the subjects, but it also gives you word for words from representatives of their particular focus. Examples of interviews include speakers such as: Raaven. Joseph Vargo. Art Aguirre, Ego Daibous and several others.

There are many reasons to own this book besides a simple introduction in to dark subcultures. I’ve come across books that treat these issues like novelties, and Corvis has much more respect by really helping the readers to gain insight. A good case in point would be topics that cover religions of beliefs such as paganism, satanism, wiccan, Asatru, Dark Paganism, Modern Primitives and Chaos Magick which in some setting might cause concern if you were tying to read from the Satanic bible in a public forum. So in essence you are able to tackle alot of curiosity under one roof. Insights for me were covered in deeper explanations of the culture, origins and public misconceptions. Religion is a large and sometimes vague subject, that Corvis is able to convey in an easy to read format. I’ll be honest there is much covered here I never heard of or knew existed. Examples on diverse religion sects, sub-cultures of vampirism, underground trends and fetishes are really given attention to. Has anyone heard of the “Black Veil” or “Order of The Dragon”? I know I haven’t. Well until now.

This books deserves a good read and then several more after it. For readers, occult enthusiasts, dark culture curiosities, Goths and researchers, Corvis has done the work for you. Highly recommended not only to readers but to horror fans for deeper insight into cultures that have influences many films, and media trends that pop up in several mediums today and past. There’s something here for everyone if not for curiosity sake alone.