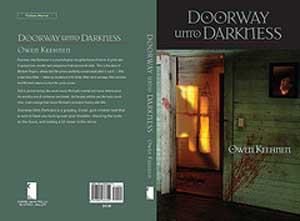 Possession, evil, darkness, brutality, and gore are all words that could be used to describe Owen Keehnen’s Doorway Unto Darkness. Keehnen tells the tale of a man possessed by an all-consuming, powerful, and unmerciful evil; a man whose body and mind are consumed by someone or something that has no qualms about killing innocents and doing it in the most brutal and barbaric of ways. Keehnen takes great care to create a sinister tone with a gory backdrop. This journal-esque tale is written from the perspective of the main character as he explains how he is over-taken by a madman and left to feel the guilt and remorse in the aftermath of the possessor.

The main character of the story’s name is Michael Rogers who, on the outside, seems like a typical middle-aged janitor; Michael lives alone and his only family tie is his mother. A much darker side of Michael rears its ugly head when he begins to accept and understand Mel, the spirit with whom he is possessed. Mel is truly evil incarnate, having no scruples and no reason behind his killings; a killer who doesn’t kill for money, fame, or any of the other usual reasons. Curiosity really begin to get the better of me as I wondered what Mel was; was he a demon, a spirit? As the story goes on Mel and Michael become more and more intertwined and Michael becomes less Michael and more Mel; or is that what Michael really was all along? I also got a glimpse into the character of Michael’s mother, who is proper and rule-abiding with plenty of self-denial. Michael’s relationship with his mother consists only of pleasantries and an obligation to family, leaving Michael truly alone. There really are only a couple of other characters who are there as more of a backdrop for Michael’s story; mostly these characters are there for fodder for Michael’s growing contempt. This fodder consists of some annoying co-workers, a power-tripping boss, a few nosy neighbors, and of course some random strangers for the killing.

As I delved deeper into the story I found more out about where Mel came from and why he possesses Michael. I don’t want to give too much away but I will tell you that there is good explanation as to what has caused all of this to transpire. You’ll just have to read it to find out! This is no ordinary tale of possession though; no it’s a horrifying trip down a twisted and dark road. There is virtually no lag time meaning that there are no long-winded spiels about anything unnecessary to the plot. There are also some great torture and kill spots in the book that could make a normal person’s hair stand on end. A gory death sequence in a book is always a plus. The only complaint that I have is the winding down at the end of the book, I felt the end wasn’t quite as strong as the rest of the book but it did wrap things up neatly enough.

I have to give credit where it is due; Keehnen has a penchant for telling about the creepy and macabre. This man is one hell of a writer, there is nothing amateur about his writing style. One thing I realized while reading this novel was that Mr. Keehnen’s story telling reminds me much of my husband’s, whom also writes; there is something similar about their writing style and characterization. In other words Keehnen has definitely won a top spot on my favorite author’s list and I would love to read more. 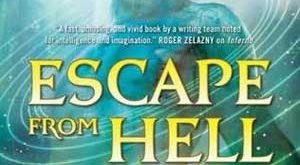