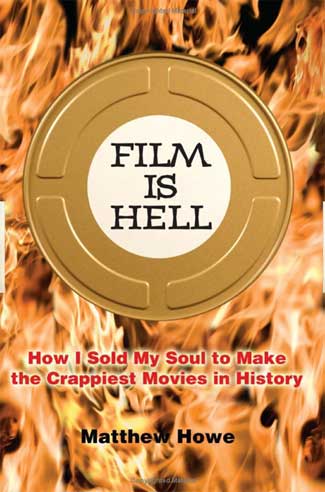 FILM IS HELL:
HOW I SOLD MY SOUL TO MAKE THE CRAPPIEST MOVIES IN HISTORY

A great writing style loaded with sarcasm and humor always make for a more interesting read. The latest book I’ve come across is titled “Film is Hell” by Matthew Howe

What we get in a nutshell, is a struggling filmmakers point of view told at times almost in a diary like fashion who entertains his readers with his tales from early years, to film school and into the working class. Instantly Matthew’s style of writing pulls you into his worlds and the mishap adventures he shares in his ordeals, freelance jobs and guerilla filmmaking exploits. In a sense what I loved about this book is that its honest. Anyone working the field knows that when you are not operating on huge budgets, alot of innovation is needed to get shots.

These shots are explained and detailed as the film crew he trods around with does what they need to get the job done. At times much is overcome by clever social engineering, misdirection and vagueness to confuse those who try and get in the way. Other times they have to eat their words and face the consequences or at the least forgo the shots for the day and try and figure out something to replace it rather quickly.

Howe gives us a bit of his early life when he finally completes film school and has to deal with the real world. Taking a job to make ends meet and a lack of confidence prolong his headfirst approach to the point of a stroke and hospitalization. Then by pure reaction to the dire situation, Matthew begins his head first descent into the world of freelance filmmaking. Easy enough the range of characters, workers and film folks he meets along the way are a whole tale in themselves.

The book works much like a diary in transition that is accompanied by a monologue of sorts. As funny as these situations seem to be straight out of a movie, they are in fact the real deal. Highlights for me include filming at the old farm who’s owner left his sh*tpads strung about, the toilet clogging up the night before a big shoot and flooding the bathtub with sh*t water and the pains of dealing with the one off LEMPS (Lower echelon Media personalities).

These are classic stories that really fill the read with the “real world” of filmmaking. It’s no surprise that actors are brought in to seed the marketing and then only filmed for a day. Though the reality of the stories about them will help readers get the gist of why that’s done and the comfort zoning that is entailed with having a “name” on your set. Particularly Robert Davi and his star-padding exploits are alot of fun to read. The cigar kiss ups to the reaction he has to the first batch of sh*t-gars. It’s all here for budding filmmakers to read “before” they jump on the wagon. Glamour and accolades? Ya, only if your lucky, the real deal is told as hard work on top of harder work. The late nights, the lack of sleep, the set problems, the actor temperaments, the lack of funding, and the too often wrench thrown in that kills the shot list set that particular night. Not only do you get a story, and a diary but a lesson in life’s world of making movies.

Other highlights for me include the “number of ways that the crew captures those money shots without the budget in place to do it. Fun moments are found in the cutaway restricted castle shots and the studio explosions that the filmmakers were able to sneak some footage out of the back of there van. Hard work? Yes and a knack for innovation when the $ isn’t there to do it yourself.

This book is alot of fun and informative for those who want to “know” what really awaits them. Being a film making myself, I can tell you that none of this is fiction. Making films is alot of work and quite the undertaking. The issues, the problems are all there and only make you stronger as you trod thru them. Without that hardening many films wouldn’t be the success they are today. I feel readers will love this book and appreciate the humor that Howe instills in his writing. Again I need to reiterate that this should be a required reading to film students and class instructions. If anything, you’ll go in better equipped to handle the chaos!