Synopsis:
“A sociopathic killer known as “The Man of Sin”, with his hand deep into the metaphysical world, feels that he had committed all atrocity that he can on this plane of existence, leading him to experiment with placing his own mind within the consciousness of others and manipulating their actions – all with the intent of experiencing their life…as well as their death…”

VIViD contains numerous references to Lewis Carroll’s Alice in Wonderland and Through the Looking Glass, feature films such as THE CELL, FLATLINERS, ALTERED STATES and JACOB’S LADDER – as well as recent works such as INCEPTION and the
anime PAPRIKA (or Papurika as it is known in Japan).

The screenplay was written by Brandon Slagle and Jimmy Creamer – aka Industrial Speedcore musician ScreamerClauz and was Executive Produced and Produced by Devanny Pinn and Brandon Slagle – with Keith Kraft as Co-Producer.

This is a promotional video made for the comic book/anime-styled action/horror/fantasy feature film VIViD, directed by Brandon Slagle for Zeroinside Films. You can view its IMDb page here –
www.imdb.com/name/nm1761677/

A FULL trailer will come as Spring draws closer and certain CGI and visualeffects are completed. The film should see limited release sometime in the summer. 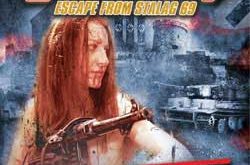