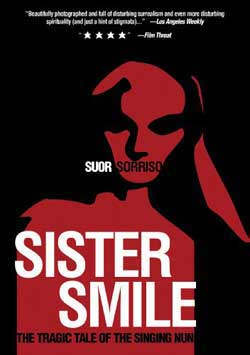 Back in late 1963, a Belgian nun known only as Soeur Sourire, or Sister Smile, topped America’s pop music charts with the relentlessly cheerful tune “Dominique,” from an album that sold 1.5 million copies. From the little that is known of the ill-fated nun’s life, Roger Deutsch has made the boldly speculative yet persuasive Italian-language film “Suor Sorriso” in which the nun (Ginevra Colonna) emerges as a tormented, unstable woman who abruptly left the convent after her recording triumph before taking her final vows. Running a shelter for wayward girls, she and another ex-nun (Simona Caparrini) enter a passionate, tumultuous and destructive affair. Colonna’s volcanic Deckers craves spiritual redemption as well as the other woman’s love but is so beset by demons that she embarks on a flamboyant, drug-fueled downward spiral that ultimately engulfs her lover as well as herself.”

Perhaps an unlikely choice for a horror site to review, though we do pay honor to films that fit within a cult styled genre. The film “Sister Smile” caught my eye as a odd story with a spin on the downward spiral of a nun. Well not just any nun, but a Belgium girl by the name of Soeur Sourire known by her singing moniker of “Sister Smile”. Upon joining a convent, Sister Smile (Ginevra Colonna) finds solace in her guitar and song. It is the convincing of her convent to record a few tracks at a local studio that sparks a rather unique breakout of her song “Dominique” placing it on the pop charts as a hit single.

This combined with her album of 12 songs fuels a new pop artist sensation that while never performing in public is recognized the world over as this fictional character called Sister Smile”. Though with fame comes a need for her to see the world and explore her inhibitions. Sister takes on the world including a reoccurring lesbian relationship, a frequent visit to her fathers house and a further spiraling into dark places. While the film moves at a somewhat lethargic pace, we almost at times feel as though the journey is inevitable following a misplaced soul who really cant find her mark in the world. The later plunge into drugs, and sex becomes a another factor that the sister uses to chase her inner demons in search of feeling “something” to validate her depressive nature.

Wonderful? Not really, maybe slightly nostalgic but more reminiscent of earlier films that leave us on a decent into chaos. It was reported that the girl who was born under the name of Jeanne-Paule Marie Deckers, created this frenzy as a result of never being able to live up to her fame. Though the film really isn’t as much of a “torn artist movie” as you would expect. Being hunted by the IRS for back taxes, perhaps she felt that she needed to escape through other means. The film is based on the true story of the one known as the singing nun. The film at times feels dream-like which is fueled by Deckers, self destructive behavior. Perhaps it is more powerful in the sense of where she came from rather than where she is going. Even with that being said its final act is somewhat lurid in its final moments creating a tension that is realized into what ultimately turns in the direction of a depressive movie.