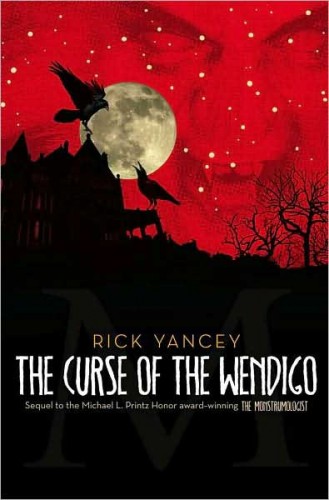 It is called Atcen…Djenu…Outiko…Vindiko. It has dozen of names in a dozen lands, and it is older than the hills, Will Henry. It feeds, the hugrier it becomes. It starves even as it gorges. It is the hunger that cannot be satisfied in the Algonquin tongue its name literally means ‘the one who devours all mankind.'”Will and Dr. Warthrop must traverse the desolate wastelands of Canada…and in the process, may discover a truth far more terrifying than even they could have ever imagined.
Ages 14 and Up

AS APPRENTICE TO DR. PELLINORE WARTHROP, Will Henry has lived a life dedicated to the pursuit of monstrumology: the study of monsters. But when Dr. Warthrop is informed that his old mentor Dr. von Helrung is trying to prove the existence of the mythical Wendigo, He Who Devours All Mankind, a creature that starves even as it gorges itself on human flesh, Will’s world is plunged into fresh turmoil.

Growing up your taught if you have nothing good to say about something or someone than you should say nothing at all. As grownups we know that as good a rule to live by as that is sometimes it just can’t be done. As a book reviewer who has just finished reading her next assignment, The Curse of the Wendigo by Rick Yancey, I was prepared for this to be one of those times. When I first finished reading The Curse of the Wendigo the weekend before Christmas My opinion of the book was of extreme dislike. Everything I liked from the first book in this series, The Monstrumologist, was either missing or toned down in The Curse of the Wendigo to the point where it felt just like any other Young Adult Novel. I started a rather negative review before I wondered if starting this novel right after reading the first one was the wrong thing to do? With that in mind I decided to rethink my review for a few weeks before retyping the negative one I started. Last Thursday I stated on my Twitter that Friday would be the day that I finished typing this review because after thinking over my feelings for The Curse of the Wendigo for two weeks and my opinion of the book not changing that it probably wasn’t. Friday morning I woke up with a whole new understanding of the book. Guess I should have tweeted that sooner.

Returning in the next three sets of The Monstrumologist Series Journals are Protagonists Doctor Pellinore Warthrop and his apprentice William Henry in their next adventure to aid the Doctor’s former fiancée Mrs. Muriel Chanler in locating her missing husband. The search takes them into the Canadian wilderness where her husband was last seen searching for a beast that not even the Society of Monstrumologists think exist. Mr.Yancey keeps the characters as he established them in The Monstrumologist with only little change. Wendigo takes place only a short time after the first one so a big change would have been out of place. With the second novel Mr. Yancey dives more into what makes the Doctor such a frustrating character by expanding Will’s knowledge of Pillinore’s history as he unfolds it from the bits and pieces he hears from the Doctor’s old love and co workers. At times the information given in the book gives you false guesses at what’s going on with Pellinore’s past and if his friend is suffering from dementia or if there is something else going on with him.

Where the first book had more of a in your face knowing what you were dealing with horror element to it, Curse of the Wendigo relied more on the psychological terror of what you didn’t see. There were times when human imagination was much scarier than what was being written because much wasn’t. The reader is kept in the dark for most of the novel with shorter chapters that are less descriptive than Mr. Yancey’s previous novel, but the quicker pace of events makes up for it.

Like the Yancey character I automatically took the books as a work of fiction. That was until I noticed he listed William James Henry as the author and himself only as the one who edited the journals. This is kept up in the acknowledgment page. Keeping with staying in character called to the part of my mind where anything could be possible and as I continued reading after seeing that I had the lingering wonder if the journals really were real? I believe there are things in this world that people take for fiction that are or at least at one time were real. In thousands of years from now if records are lost our extinct or endangered animals may be counted as fiction too. One thing for certain is I will be a little more cautious taking a stroll in the woods behind my house from now on.

Curse of the Wendigo may not be as good as The Monstrumologist or really even a worthy follow up, but it is a book that deserves to have a second look if you did not like it after the first read like I did. You never know what you might discover the second look through its pages…or what might discover you.

Tags Rick Yancey The Curse of the Wendigo 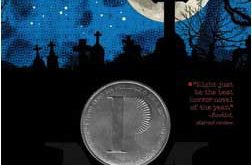