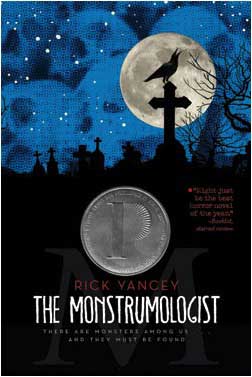 “Had I not seen for myself Eliza Bunton in that obscene embrace, or witnessed firsthand Erasmus Gray’s demise, I no doubt would have thought his tale a product of a tortured mind, a delusion borne of an old salt’s dementia, worth no more than the stories of mermaids and leviathans able to swallow a ship and her crew whole. Could there be any crueler irony than this? How, upon his rescue, the truth had brought him here, to a house for the mad, for only a madman believes what every child knows to be true: There are monsters that lie in wait under our beds.”

I know the stigma a YA stamp carries among the horror community, but we, as a community, need to get over that crap. We already know, thanks to the huge popularity of Harry Potter, that works aimed at the low to mid teen age group can not only work, but be damn powerful so long as they don’t underestimate their audience. With The Monstrumologist, Rick Yancey leaves no room for underestimation and puts together a fine, chilling and emotionally affecting tale in the process.

This story, under the found-fiction guise of a journal, places us in the head of young William Henry, an orphan in the care and tutelage of Pelinore Walthrope, a dour and no nonsense studier and hunter of what many would call monsters, though he most certainly would not. The town is facing an imminent infestation of Anthropophagi and dear Mr. Walthrope is the only one with the knowledge and ability to deal with it. Over the course of the adventure, Will learns a few things about his master that force him to rethink the way he sees the man to whom he’s handed over his fate. And people die in incredibly messy ways.

When I said before that Rick doesn’t underestimate his intended audience, I wasn’t blowing smoke up your ass. This puppy is full to the gills with the type of guts n gore that made Peter Jackson’s career in the way back when. Heck, the mouth full of pus scene gave me shudders that I haven’t experienced since the smegma incident from The Bighead. More than that, though, is the emotional and intellectual maturity this work demands of the reader. Picture something written with the austere style of Dickens, the moral ambiguity of Lovecraft and the emotional heart of… In all honesty, I can’t think of anyone else who so well captured how it feels to see the cloak of omnipotence and omniscience ripped away from those who control our lives, to see them as frail and flawed beings who have, on occasion, screwed up really bad and continue to do so, followed by the realization that they are doing the best that they can, the best that they know to do with what they have. It’s a screwed up time that we all have to go through and he deals with it with a frankness and grace that is down right astounding. I won’t bother going into detail about the references to Darwin, Nietzsche, Shakespeare and Herodotus because you’ve got the point: he trusts that you have the brains and ability to read it and he isn’t going to talk to you like an idiot.

Beyond that, if you find yourself in need of more, there is no lack of action within these pages and, as a lover of monsters, I adore Yancey’s choice for this go round. Anthropophagi (large, vaguely anthropomorphic beings without heads but possessed of faces in their chest, large mouths filled with row upon row of razor sharp teeth and a voracious appetite for human flesh) are a far cry from the over used fanged or moaning brethren that saturate the market and are among my new favorites. Those bastards are pretty badass. The pacing also settles into a nice ebb and flow that never left me bored.

But… look back at that mention of Dickensian language and style. If anything is going to put someone off of this book, that would be it. If you are impatient, lazy or unwilling to look the occasional word up, you probably won’t dig this. Of course, much like Lemony Snickett, I don’t think he is going to change anything for your intellectual inertia. 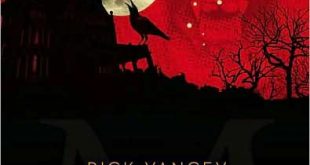