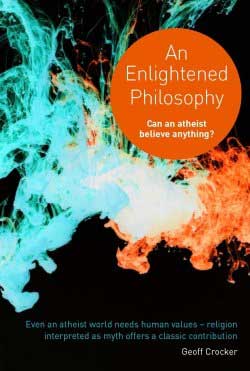 What Can an Atheist Believe? A 21st Century Vision of Myth as Moral Framework

One of the most charismatic and popular figures in the ongoing 21st century confrontation between the religious, the anti-religious and non-believers, Geoff Crocker has synthesized his comprehensive studies and involvement in the “God debate” in a new book, An Enlightened Philosophy: Can an Atheist Believe Anything? (to be released simultaneously in March, 2011, in England and in the United States).

In our tumultuous times, for the disenchanted, for the skeptic and for open-minded seekers on both sides of the debate, An Enlightened Philosophy is making its appearance in the nick of time!