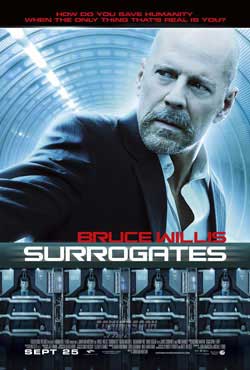 Set in a futuristic world where humans live in isolation and interact through surrogate robots, a cop (Willis) is forced to leave his home for the first time in years in order to investigate the murders of others’ surrogates.

14 years ago, the world creates the first synthetic brain, 11 years ago…the military steps in and the use of surrogates becomes part of daily life, 7 years ago….. 98% of society uses surrogates. The present, surrogates are everywhere doing the jobs that humans once did. The concept and attraction is that surrogates are robots that allow the users to sit comfortably in a chair while the user controls them in everyday life. They look better, they are more efficient and they don’t wear out. In fact some of them even have enhanced functions above human ability.

They were essentially the future lazy man’s creation to do the tasks that others didn’t want to do any more. They do not function on there own but rather they are controlled by the user jacking in and essentially feeling and seeing what the surrogates see. The plus side is the user can’t get hurt or at least not until recently.

There exists of course a coalition who oppose the use of surrogates and promotes the old ways of doing things yourself. When Surrogate owners are revealed, they are only a shadow of there better selves, content in comfortable clothes, unkept and a product of there laziness. This is the direction that society has evolved into. Even relationships can be assumed under a different appearance controlled by the host. It has become a better world and the crime rate has dropped off the map. Opposers operate in what is called “Surrogate free zones”. They farm, build and interact in their natural human form. Their leader who calls himself “The prophet” heads the coalition on a basis of freedom and non usage of robotic simulations.

Directed by Jonathan Mostow, Surrogates is a class A sci fi film that ranks right up there with films like “I am Legend”. What is more compelling is that these science fiction fantasy film are not so removed from the reality we could evolve into. This is what makes for a great film. An older film, by the name of Roller Ball also used similar techniques to predict the fall, change and progression of society. Whether its nightmarish or just something we all dream of it does ask the quesion…What if.

The film stars Hollywood players Bruce Willis as Tom Greer, Radha Mitchell as Peters, James Cromwell as Lionel can’ter and Ving Rhames as the Prophet. The story goes….. that Lionel can’ter invented the surrogates but later became a recluse who felt that the invention was a mistake.

The easily seen lack of real human interaction is a strong point for argument and one that can’ter didn’t anticipate. Another problem is the ability for others who are advanced enough to take on the indentity of any surrogate, who could easily assume an false identity. The current state of issues involves a gun which can kill off the surrogate “and” the user at the same time. This factor alone is one that wasn’t anticipated and presents a problem that has the officials hot to solve.

Jennifer Peters is Greer’s assistant who is aiding on the case. Tom has decided to free himself from his surrogate and investigate as a regular human being. With the threat of surrogate and user death connections it is the only real choice. Though being separated from a surrogate has some side effects that induce slight dimensia and anxiety. Not too uncommon considering that the perspective is changed dramatically. VSI corporation is the leading Surrogate manufacturer, of which also can control the surrogates off of a single data base.

So alot of issues and questions come out of a theory that can only be too real for some minds. Surrogates brings all the marbles to the table making it truly an exciting film and adventure. My guess? This one will hold strong in the years to come as topline science fiction cinema. Highly recommended with a great story to boot.