Don’t Be Afraid of the Dark: Guillermo Del Torro

Guillermo Del Torro may have struck gold yet again. In his latest R rated remake/update of the 1973 TV movie which was Del Torros favorite as a child he treats us to a movie that has people cringing with just the footage from the teaser trailers. He debuted this project as part of a panel at Comic Con. The footage shown was minimal I am told but should be hitting the internet in a week or two.

Guillermo had this to say about the film We are not taking anything away from the original, and we are not f*cking chickening out we wrote and originally shot the movie for PG-13, and could do that without compromising the scares But we were given a badge of honor. The MPAA came back and gave it a non-negotiable R for ‘pervasive scariness. Movies are like a pirate ship: the more R the better. Horror has to have balls. And those balls have to be sweaty and ripe this one is hard-hitting and scary like a motherf*cker. (laughs) Sesame Street: the word for today is ‘motherf*cker.’ The ending of this movie hits you like a motherf*cker.

The official plot synopsis of the film is Sally Hurst (Bailee Madison), a lonely, withdrawn child, has just arrived in Rhode Island to live with her father Alex (Guy Pearce) and his new girlfriend Kim (Katie Holmes) at the 19th-century mansion they are restoring. While exploring the sprawling estate, the young girl discovers a hidden basement, undisturbed since the strange disappearance of the mansion’s builder a century ago. When Sally unwittingly lets loose a race of ancient, dark-dwelling creatures who conspire to drag her down into the mysterious house’s bottomless depths, she must convince Alex and Kim that it’s not a fantasy before the evil lurking in the dark consumes them all.

Tags Don't Be Afraid of the Dark Guillermo Del Torro 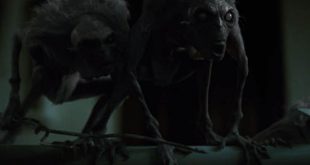 12 Bad Jokes About ‘Don’t Be Afraid of the Dark’ 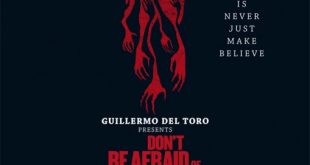 Don’t Be Afraid of The Dark – poster Version 7