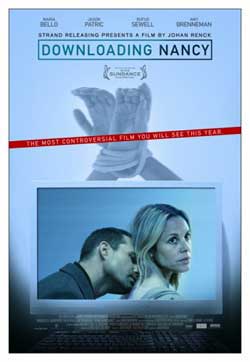 The story follows the fate of the unhappy wife Nancy who orders the guy she meets over the Internet to kill her, but the two of them fall in love.

Have you ever been so lonely, so lost , so incomplete that death seems like the only escape? Downloading Nancy is exactly that tale. Based on true events.

Calling this film a horror film would be incorrect. A somber dark drama with philosophical overtones would be a better classification though because of this it places itself in a weird category that fringes on cult driven. The horror is subtle and served a bit different than what viewers would expect.

Nancy, our focus of the film is best described as a manic depressant, cutting addict and terribly alone in a marriage of 15 years that has reached a state of nothingness. She attempts to console in her psychiatrist to find reason for it all, but in the end the only saving grace is per an online acquaintance she has sought out to strike a deal with. Albert (Rufus Sewell), Nancy’s husband is unemotional, consumed by work, humorless and a complete blank slate. His spare time is spent swinging at golf balls that aren’t there and besides his invention of a golf lounge game is pretty disconnected from everything.

Louis Farley (Jason Patric) is the online acquaintance who Nancy has formed a relationship with. The relationship though is not the typical formula that we’ve come to know. A rather mysterious and yet fulfilling bond has formed between the 2 as Nancy sets out to meet this man who has promised to keep his end of the bargain.

Beyond that we get wave of the story by a handful of bits and pieces that brings us up to speed through situations and moments. The film doesn’t play in any linear fashion with it’s story points arranged in segments. When we start to assume a linear fashion, it returns to bouncing back and forth between past and present.

We learn that Nancy has spent 15 years of marriage in a relationship that is unfulfilling as anything she has encountered. The simple act of sex is painful, awkward and to the point of non-existence. Her marriage has long been uncomfortable, strained and un-emotional…which seems to be the core of her misery.

The film is centered on a downward spiral of humanity and emotional decay. Nancy is at war with herself and has also grown a strange addiction to “cutting” herself or self inflicting pain. Scar covered arms reveal that this affliction has gone on for quite some time. Her psychiatrist calls it “repeated stimulation”, though Nancy argues that the real pain is her life. In fact the pain and cutting serve some abstract purpose for Nancy to feel anything. That anything is addictive and gets worst as she continues in this state.

Instantly, as the film begins you are taken to a rather somber driven tale with characters that take awhile to get to know and a story that wants to be unveiled. Downloading Nancy requires a bit of focus with it’s release-as-you-go story line.

Nancy, a pain addict or such begins the film with a journey that is explained to be her visiting friends in Buffalo. After arriving at her destination, She meets a man at the bus terminal who she exchanges words with but in a rather odd manner.

At home her husband Albert is seen playing golf and pacing around wondering where his wife is or why she isn’t calling. Louis, this stranger she has set out to meet provides a philosophical comfort in addition to the ritualistic acts she asks him to perform on her. Other subtle but powerful moments of symbolism are injected to drive the point home. A fishbowl focused on displays a dead fish floating on top while another swims below. A heart carved into wood. A home without pictures or personality. Everything seems relative.

Director Johan Renck has created not only a somber piece but a storyline and narrative that has it’s viewers by the seat always awaiting “the” punch line. The formula and style this piece delivers is at first hard to consume yet does so in it’s own special way. What we end up with is an amazing drama that is played out calculated and inherently pulsating with darkness of the human spirit that I believe will connect with many on several levels.

An inherit sadness haunts the piece with actress Maria Bello’s amazingly cold and disconnected performance. Jason Patric and Rufus Sewell provide a nice balance of troubled emotional states that only reinforce the cast performances. “Downloading Nancy” is quite a different film that is carried from start to finish with a memorizing score from Krister Linder. In fact, the score is easily comparable to the score that is featured in the film “Solaris”. Quite an emotional display of loss at its finest.