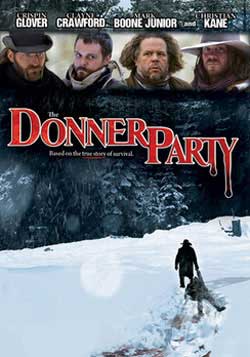 A group of settlers making their way from Missouri to California soon find themselves trapped in the snowbound wilderness of Nevada. Running low on food, a small expedition sets out to find a stockpile of food only to discover that it doesn’t exist. Stuck out in the middle of nowhere with no food the group turns to cannibalism in order to survive.

Everyone has heard of the Donner Party. Even if you were like me and didn’t really pay much attention in History class you at least know the basic story. Because I have always been a morbid guy I thought it was a fascinating story when I was younger and always knew that someday someone would make a horror movie about the events. While I don’t really consider writer/director TJ Martin’s film “The Donner Party” to be a horror film I will admit that it is still pretty damn good for what it is.

To be honest with you though at first I wasn’t sure that I was going to like it. I am not that big into period pieces and even though Crispen Glover (who is one of my all time favorite actors) was in it I went into it expecting not to really care for the movie. I wasn’t quite blown away by it but I wasn’t bored out of my mind by it either. Even though it moved very slowly at times I found it to be entertaining nonetheless. If memory serves me correctly the filmmakers took a few liberties with the actual story, but unless you are a history buff (or someone who gets his or her jollies out of pointing out such things like this when it comes to movies) you won’t be bothered by it.

In a way I thought that it had an “Open Water” feel to it (no, they aren’t in the middle of the ocean being menaced by sharks) as the characters are facing one of those situations where you tell yourself “Oh man, that’s such a horrible situation to be in and I don’t know what I would do if it was happening to me” as you are watching it. Personally, I am cold natured and freeze to death unless it is under75 degrees (because I don’t have a soul I guess) and watching these poor people out in the middle of the wilderness surrounded by snow made me shiver. Since I like to eat very, very much (I think I could be in one of those eating contests) witnessing these settlers starve made me really feel for their plight. Freezing or starving to death are both very low on my list of ways that I prefer to die, even more so after seeing this movie.

“The Donner Party” has a strong cast made up of very talented actors. As I stated earlier, I love Crispen Glover and think that the guy can do no wrong. He is excellent as William Foster, the man who nominates himself to lead the expedition and who eventually begins to enjoy killing off the other members in his party. He claims that he has to kill people to help ensure that the others in the group will have enough to eat, but I think that there is a point where he does it just because he wants to kill someone. He soon becomes obsessed with the idea of killing someone and at one point he eagerly makes a sport of it as he hunts down one unfortunate individual through the woods. Though he may have had a good reason for killing someone at first toward the end the need for food becomes secondary to his bloodlust.

Christian Kane is good as always in the role of Charles Stanton even though he doesn’t really have that much screen time. Clayne Crawford is also pretty good playing the part of William Eddy, but to be honest I just didn’t like the character. I know he is pretty much the hero and that he is one of the main people who have a problem with killing and eating the others, but I just didn’t care for him. He is a little too stern and unlikable in my opinion that I had trouble rooting for him (I think the main reason may have been because he reminded me of a teacher I had in high school that I despised). I had no problem with Crawford’s performance; I just disliked the character he was portraying.

Even though I liked the movie there were a couple of things that I had a problem with. As I have already mentioned the pace of the film is slow, and at times the action seems to almost come to a complete stop. I wasn’t expecting nonstop action considering the subject matter, but still there was more than one occasion while I was watching it that I couldn’t help but feel a little bored. The lack of gore also bothered me a bit as well. I wasn’t looking for gallons of blood but I thought that we’d at least get a scene or two with some decent blood and guts (I mean come on, these people are eating each other!) but alas it was not to be. Instead we get a light stabbing, someone shot in the head, and a bludgeoning that mostly takes place off screen.

Overall “The Donner Party” was a nice change from the hard core horror films that I usually watch. I have a feeling it will be shown in a lot of high school history classes in the future as there is really nothing offensive that would make it inappropriate for younger viewers. If you are in the mood for something a little different I suggest you give it a try. I also recommend that you have something to eat on hand while watching it as I was starving by the time I was done watching it. Then again, maybe I have issues.