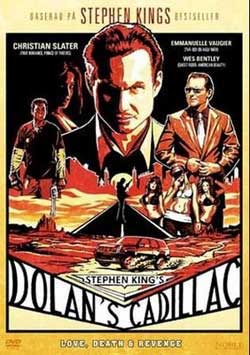 A dark revenge tale about Las Vegas middle school science teacher (Robinson) whose beloved wife (Elizabeth) witnesses an execution in the desert and is then targeted for death by the mobster who committed it, notorious Vegas crime lord Jimmy Dolan. Dolan’s vast wealth stems from his human trafficking operations. Dolan succeeds in having Elizabeth killed before she can testify against him. Without a witness to the murders, Dolan goes free, and Robinson must avenge Elizabeth’s death on his own.

Jeff Beesley’s film “Dolan’s Cadillac” takes Stephen King’s short story of the same title, and puts it on the movie screen. This heartbreaking tale of two innocent people that are unfairly pulled into the gang world, and the consequences and new life once must live up to after being cruelly initiated.

Robinson (Wes Bentley) and Elizabeth (Emanuelle Vaugier) are both elementary school teachers, who are desperately trying to have a child. Their marriage is a very happy one, and is shown having a peaceful life with very little disturbances. Elizabeth decides to take a horseback ride out in the outskirts of the suburbs in which they live in Las Vegas, Nevada. She comes upon a scene of a truck-full of Asian women being smuggled in, and are suffocating in the back of a truck. She also sees a black Cadillac SUV drives up, in which the leader of the human trafficking Jimmy Dolan (Christian Slater) is riding in. He is presented as a very angry, cruel man that uses women as a profit. Not happy with how the truckload was treated, he slaughters the whole group of girls and driver. Elizabeth panics when she sees Dolan noticing her from a distance, and immediately rides her horse all the way back home.

Panicked from the whole scenario, Elizabeth confides in Robinson about the scene in which she witnessed. They immediately go to the cops, but see that they can’t help them without any kind of physical evidence. When Robinson and Elizabeth come home, they find a dead Asian girl on their sofa and know that they are caught up in the world of deadly mobsters. The couple calls the FBI to get them involved, and they promise to keep them safe while awaiting trial shacking them up in a hotel room.

While Robinson and Elizabeth spend months in their hotel room hiding from Dolan, Dolan continues his business demanding the women come in better looking for his own personal enjoyment. There is a torture scene showing a woman’s tooth being pulled just as a sick punishment that shows Dolan being heartless. Dolan also keeps in mind that he must eliminate his witness against him Elizabeth, and sends his cronies out to find Elizabeth.

One night, Elizabeth wakes up with a horrible upset stomach and goes in to the bathroom to vomit. Thinking she is pregnant, she happily runs out to go pick up a pregnancy test unaware of her surroundings. Robinson notices Elizabeth left, and jumps out of bed to go catch her. By the time he sees her get in her car it is too late, as he watches her life end right in his face through a fiery car explosion. Dolan gets his way decimating the key witness to his unlawful business, and Robinson is devastated in losing the love of his life.

Robinson attempts to go on, but also is shown extremely depressed drinking and contemplating what to do next. He also is shown not being able to deal with his job of teaching his elementary school class as well as he used to. He decides the right thing to do is to find Dolan himself, and teach him a lesson in cruelty as he did on him and his wife. Robinson purchases a gun, and is shown with rookie talents shooting. He is also haunted by his wife’s spirit, repeating over and over to kill Dolan. Inspired by this chant, Robinson is fueled to attempt anything to avenge his wife’s death.

Obsessed with finding a way to eliminate Dolan, Robinson stalks the black Cadillac SUV to find out that Dolan goes to his office in Los Angeles, California every Sunday taking the back roads in the desert. When Dolan realizes he is being followed, he follows Robinson to a gas station bathroom. They hold Robinson at gunpoint, and do not kill him announcing that Robinson doesn’t have the guts to kill Dolan. Robinson gets a job with the highway construction workers, and picks up shifts to work Labor Day weekend. He digs a giant pit in the road, and covers it with a giant black tarp. After clocking the time that Dolan’s Cadillac usually comes down the road, he removes Road Closed signs to open a path of destruction for Dolan and two of his henchman.

The Cadillac comes down the road, and immediately hits the trap Robinson set for them. The driver is killed upon impact, and the passenger henchman is severely bleeding from cuts. Dolan is seen throwing a fit, and angry not being able to get out the doors being stuck. Robinson’s plan works, and he tortures Dolan as he had been tortured with his wife’s death.

Wes Bentley did a good portrayal of Robinson, the grief stricken husband who would do anything to see revenge on Dolan. His emotional downfall is very saddening, and is very believable with having to deal with your own fate and not having to wait on the enforcements to slowly do their job. Christian Slater also does an awesome job as gang leader Dolan, playing the part of a womanizer and very cruel gentleman. The plot is very interesting, and touches the soul in ways that one can empathize with Robinson’s unfair ordeal. There is not much blood and gore, but lots of gunfire and gang ordeals that keep the action flowing throughout the film.

he theme of loss and revenge in Jeff Beesley’s “Dolan’s Cadillac” is driven towards a culmination of success that Robinson encounters in killing the bad guy himself. Fueled by losing the love of his life Elizabeth, this story shows that one would go to great lengths when the death of a loved one is surprisingly thrown in your direction.