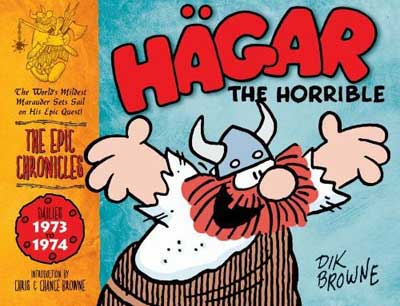 HAGAR THE HORRIBLE: THE EPIC CHRONICLES: THE DAILIES 1973-1974 (HARDCOVER)

Long before the Sammy Hagar and the Van Halen clan, came the Viking norseman cartoon strip that caught on almost overnight by one frustrated cartoonist. That cartoonist was Dik Browne. A talented fellow who had spent the better portion of his life cartooning an already popular series titled “Hi and Lois”…but alas, the rent and bills need to be paid and it was due time to try and re-invent himself. This rather thick and compact book featuring over 320 pages is appropriately titled “Hagar the Horrible”.

The contents are the strips collected from the dailies of 1973 – 1974. I remember far back picking up newspapers and letting the cartoon section provide that days comedy. I had a few favorites and Hagar just so happened to be one of them. Lucky for us, Titan Books saved us a year of collecting papers and dropped in our laps a fine collection of strips all under one roof.

Hagar’s comedy comes in the simple and mundane. In fact the humor even though set in a medieval tim,e mirrors the human relationship often shared in marriage. On one hand…… a tough, a take no prisoner, barbarian scruffy warrior, …..on the other, a day to day humbled servant to his get-to-the-point wife and family. In many respects, it closely resembles the olden days “honeymooners” scenario. Though with the strips being 1 to 2 panels usually the gags are short and sweet. Proper for cutting out an pasting on office walls.

Hagar comes at you as sarcastic and on other occasions just a plain goof. The situation of plundering, and Viking lore present a unique atmosphere that enables his overwhelming manhood to surface and then as easily get squashed with his home life needs. I must admit I enjoy his constant bickering with his wife Helga the most.

Every time he tries to uphold the upper hand, he is quickly defeated and sent out to get groceries or some household task. Other times humor comes with devices such as glasses being offered to him in which he can see his wife better …needless to say he destroys them immediately. Things like this are just enough to put a smile on your face for the simple associations they bring.

Hagar also interacts with a few other characters quite often. His daughter Honi, who’s girl troubles usually involve relationships or finding a suitor. She is clearly a wife in training with sarcastic outcomes. Lucky Eddy, who far from it, is tasked daily with atrocious acts for Hagar such as serving as a temporary anchor for his boat. Hamlet, whom Hagar refers to as a pastry puff, is his son and air to the throne. Hamlet has all the makings of the worst viking in history. Very enjoyable stuff that is even better collected for viewing the whole shebang. A ravenous good time …this one!