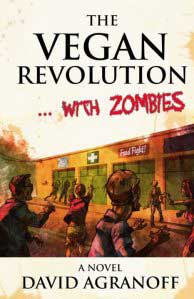 “Presenting Stress Free Food! Animal suffering is a thing of the past. Hipsters can now enjoy bacon without guilt. Thanks to a new miracle drug the cute little pig no longer feels a thing as she is led to the slaughter. The only problem? Once the drug enters the food supply anyone who eats it is infected. From fast food burgers to free-range organic eggs, eating animal products turns people into shambling brain-dead zombies – not even vegetarians are safe!

In Portland, Oregon, vegans, freegans, abolitionists, hardliners and raw fooders have holed up in Food Fight, one of the country’s premier vegan grocery stores at the vegan mini-mall. There they must prepare for their final battle to take back the city from the hordes of roaming undead. Will vegans filet the flesh-eaters or will they become zombie chow?

When there’s no more meat in hell, the vegans will walk the earth.”

I wasn’t really sure what to expect when David sent me a copy of “The Vegan Revolution…with Zombies to review. I am a certified zombie freak and know what a vegan is and was definitely interested in how he was going to combine the two.

I was pleasantly surprised. This is a comedic zombie tale that really works. Zombies have been remade over and over as much, if not more than vampires but David’s take on zombies was quite inventive and fun to read.

The main characters were very well thought out and three dimensional, the story contained enough violence and gore to satisfy the gore hounds with enough comedic relief to balance it all out. You wouldn’t think comedy would work in a zombie novel but David pulls it off fabulously.

But what took away from what is a really good book is the simply terrible editing done on this book. It seemed like every time I would start to lose myself in the story there would be a missing word, a wrong word…etc. I am by no means an English major or grammar professional but this was very bad.

If you love zombies like I do, and want a fresh different take on our stumbling flesh eating friends I suggest you give “The Vegan Revolution…with Zombies” a try. 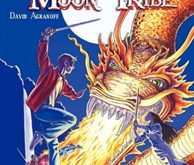