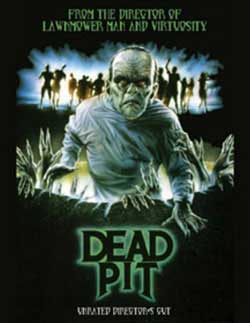 This zombie horror flick centers on the mad Dr. Ramzi (Danny Gochnauer), who’s been locked in an asylum for the past 20 years after having performed gruesome experiments on his patients and then tossing their corpses into a pit. Now, a new asylum patient with psychic abilities unwittingly gives Ramzi the power to awaken from his long slumber, resurrect his former victims from the dead and form an unstoppable army to avenge his captors.

A film back from 1989 that has found new life in its latest release. The Dead Pit centers on a patient with amnesia who finds herself at a mental institution. The institution 20 years back, served as a place of bizarre experimentation from a doctor (Danny Gochnauer) by the name of Ramzi. However as his gruesome acts are discovered in a room housing the bodies, he is shot in the head by colleague Dr. Swan. Swan proceeds to close and cement up the room with the bodies and the doctor in it to be forever lost in the dark history of the hospital. . Back to present day our patient self named Jane Doe played by the attractive Cheryl Lawson seems to also have a strange psychic based ability that can see visions of the locked room.

In her admittance to the hospital, this ability also causes a slight earthquake that opens the sealed room below. How convenient, because the dead doctor comes back to life to raise more terror. This time he has eyes that glow red like a Battlestar Galactica Cylon and a pretty bad need of a manicure.

The film continue on as more dead folks lurk around killing folks while Ramzi seems mrore content leading them and flashing his red eyes like a cheap Halloween toy.

In type 80s fashion, the film gives us the ol drilling tool thru the eye ball, a collection of dead folks rising out of a green lit pit, and some great face melting scenes. While this film is a nice addition to the 80’s undead offerings, it is no classic. I admit to missing this back in the day, but really it’s just common b-movie 80s movie making. These films are those ones that you’d stay up late watching showtime, that would come on about 2 in the morning.

The offerings were more limited back then so it probably made more of an impact than it was worth. There’s nothing real wrong with it, it just doesn’t hold up to where were are today and is somehat of a bore to watch. I would probably watch films like “Fear no Evil” before I watched this again, but “Fear no evil” was just an ok film as well.

For awhile in the 80’s we had alot of hospital-based films. This just happens to be one of them.

Cheryl Lawson with her Laura Branigan kind of look going on is the highlight of the film as she runs around the hospital in her underwear. Not her acting so much as just her in her underwear. Most of lines involve screaming and then some more screaming. There is one odd scene where she is dreaming she’s in a shower while one of the nurses sprays a hose at her ripping her shirt off. I call that intermission visual perks for us male viewers. Upon looking further, I found the reason for her great figure is probably due to her being a professional stunt double for many films. In fact, her resume reads pretty extensive.

In any case, The Dead Pit has some fun moments, and a bit of the dead emitting from the depths of hell thing going on , so take it for what’s it worth.