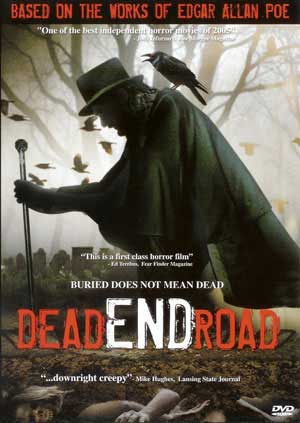 Detective Burt Williams has been pursuing the infamous “Poe killer” for many years. He reluctantly steps down from the case and retires after getting nowhere. Burt’s daughter Kris Williams, who works for the FBI, along with her partner Sean Michael’s take over the case. For the next few months the “Poe Killer” continues his killing spree. Finally Kris discovers that the killer uses internet chat rooms to seduce his prey. She logs in as “Annabel Lee” (a Poe story title) and sure enough, the “Poe Killer” contacts her. She sets up a meeting at a nearby bowling alley. But, when things go wrong and Kris is abducted and her partner Sean is slaughtered, it becomes a race against time for Burt and ex-partner Grace Andrews to find his daughter before she becomes the next victim of this madman.

Edgar Allen Poe adaptations are not easy to bring to the screen anymore and still make them compelling. Poe’s tales are old and worn out stereotypes that don’t excite contemporary horror fans as much as the 1960s and 1970s. I personally think it’s better to let Poe’s narratives fertilize a writer’s mind and leave the original story as the written word or simply adapt his tales in an entirely original and inventive way.

“Dead End Road” is rather slow and predictable in many of its set ups. The “Poe Killer” played by “David Borowicz” is also a bit to hip with his internet ease dropping tactics as he continues his murderous rage. Kris Williams “Spice Williams-Crosby“ uses the name “Annabel Lee” to track down the killer and sets up a meeting at a nearby bowling alley. You would think the killer would be more cautious with his get-together’s, or at least not be so easy to uncover. And wouldn’t some CSI division get involved somewhere along the way by searching with Poe book titles? The “cat and dog” chase ending is also another predictable plot element that makes this movie just another low budget horror movie.

The lighting is reliable and well designed which allows the camera work to be effective in its mostly nighttime scenes. The movie was shot on video and was possibly make in 2003, so it’s safe to assume “film-like” filters were not assessable to the editor at the time of post-production and sadly the movie simply looks to “video” like.

Though I do like the nice cover art on the DVD, though it kind of defies the more contemporary nature of the movie. In the end that’s about far as I applaud the movie.