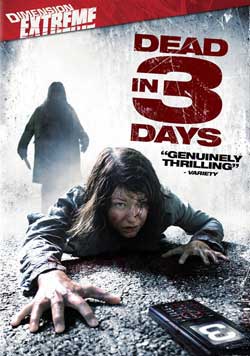 In Ebensse, the teenagers Nina, her boyfriend Martin, Clemens, his girlfriend Alex and Mona are best friends since their childhood. On their high-school graduation day, they all receive the same message in the cellular: “In three days you will be dead!”, but they believe is a stupid joke from their weird schoolmate Patrick. However, when Martin is found dead in the lake Traunsee, the group realizes that it is not a prank. When Nina is attacked and Patrick is killed trying to save her, they recall a tragic incident from their childhood.

A murder mystery thriller meets slasher flick that more or less is a formula straight off the “I know what you did last summer” assembly line. The main difference here is this film is Austrian and is filmed in some of the most beautiful settings I’ve seen as of late. We got hip young Austrian teens who just graduated college and are ready to party and figure out there lives. Low and behold they all get “texted” that they will be dead in 3 days. As expected, they snuff it off as a prank and go on partying.

Though as one of there friends Martin disappears per a gag, tied hands and a weighted tied to his legs while he’s thrown overboard, they start to perk up a bit and take it pretty seriously. Now of course a film like this fits a certain demographic, so its my guess that it was release to appeal to that age group. Most of us frequent TV viewers though will see right though it and call it for what it is. A foreign copy cat film. The killer even wears the same get up in this film as “I know what you did last summer” minus the ice hook.

What’s the motive you ask? Well, they all share a past that a childhood tragedy occurred, and now one of the kids relatives is out for blood. The plot is a bit more involved than that but you get the main idea at least. The teens of course are pretty tight bonded with a friendship that extends from childhood. So of course they party, date, go clubbing and all that fun cinema stuff you see teens kids pretty active in. The texting thing is definitely a 21st century plot add in. I’ve seen now 3 films that use “texting” in the tension aspects, though really it could of worked fine without it. Something about a slasher “texting” his victims seems a bit too slasher hip for a psychotic…… what next, haunted IPOD’s?

A bonus for me was that they included an Eglish voiceover for its release which if you’ve ever had to listen to Austrian accents for too long it can get a bit annoying. Andreas Prochaska, the director of the film is a pretty competent guy as evidenced in some thought out interesting camera shots. I was impressed with a few shots that could have gone over the top but instead used camera framing to sell the idea without really calling in Savini to show alot of excess. Like it or not, this is the proof of a well directed scene. Especially the beautiful bird’s eye view of the killer dragging a victim under the rain-falled lighting…..very nice! Sabrina Reiter who plays Nina is a cute feisty little thing that holds her own pretty well and provides the greatest on screen presence. In other words, you don’t want to see her die like the others who you could care less about. The ending throws a couple loops in it that you weren’t expecting. My thought though was was there an original ending that they added on to to give it a positive spin? Possibly??

So with all that said is the thriller thrilling? I’d say it runs a good run. It’s got some foreign appeal with a touch of slasher fun thrown in for good measures. When all is said and done…. I really have to check out that location…what a cool looking place to live!! This film will fit perfectly on your teen slahser thrillers shelf log with the rest of them. You wont find alot of innovation but you will find familiarity.