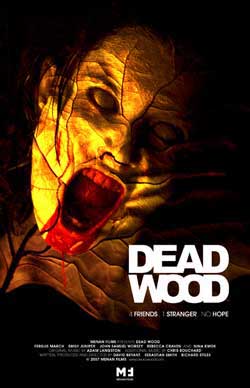 It is a rare occurence that a mediocre film can keep my attention. It could be any number of things, like maybe it has style, or it’s extra violent, and in the case of “Dead Wood”, it is the films heroine played by Emily Juniper. If there is any reason at all to watch this movie, it’s because of her. She possesses a very natural quality, during the first part of the film you hardly notice she is there but a a certain point things change and the actress takes the reigns of the story and she had my eyes transfixed to the screen. Unfortunetly, she may be the only worthwhile asset this film has going for it.

“Dead Wood” follows four friends on their for a weekend of partying while camping in the woods. Jess (Rebecca Craven) and Milk (John Samuel Worsey) are meeting for the first time. She is Larri’s (Emily Juniper) best friend whom she is trying to set up with her cousin Milk. They are accompanied by Webb (Fergus March), Larri’s boyfriend. After making their way to the woods, they get spooked by some noises but make it through the night. The next morning they discover Ketsy (Nina Kwok) outside their tents asking for help finding her boyfriend who “just disappeared”. Then one by one they disappear and our heroine tries to discover the secret behind their disappearances.

Within minutes of the movie beginning, I felt I had seen this all before. Four young adults in the woods, young lovers, as they are dispatched one by one, the character least likely steps up to the plate to save the day. Sound familiar? It should, because story wise it wanted to be “Evil Dead”. Even many of the camera setups tried to imitate the style of Sam Raimi, with mixed results. Some looked well, others not so much. The nature type photography done in the woods looked pretty nice but so much of it felt like I had seen it before. You would think a “Evil Dead” imitation would at least be fun to watch but it really wasn’t. It just felt like I was waiting forever for a payoff to arrive, when it did, it felt like a letdown. All bark and no bite. The film was light on the effects, of course CGI was but it was used sparingly and fit very well into the film.

The film was not a total waste. This cast of new faces all looked very comfortable behind the camera and were, for the most part, quite likable. The character of Milk was a bit annoying at times, while Jess and Wess seemed to be a bit underwritten, I think the actors brought a bit of life to them. That being said, Larri is there heroine, and she isn’t a real memorable heroine, mainly because the film was pretty weak, but Emily Juniper has a real mesmerizing quality about her. While I was growing tired of the film, I found myself transfixed to her and thought she was amazing. It would be a real shame if she never appears in another film, she has that quality we search for in a horror film heroine.

What is painful here is that the film was dull, a bit contrived, but had a few inspired moments. It took not one, not two, but THREE, count em, THREE directors to make a mediocre horror film with no original ideas. David Bryant, Sebastian Smith, and Richard Stiles, all first-time filmmakers, had the drive to do a film on their own, but their style wasn’t much of a style and more of an imitation. Same goes to the script, which is credited to Bryant, but would assume that all three had their share of input. It’s a shame the final product could not have shown a bit more inspiration and a lot less imitation. It isn’t always flattery.

“Dead Wood” wasn’t a waste of time. If you like slow moving horror films with a moderately fun ending, then if nothing else is on, you may want to watch it. The actors formed a really great ensemble, I felt connected to them a certain level, they believed in what they were doing and it shows. If a film is gonna have three directors’, it should have been way better than what we are watching here, should have been way more inspired but instead it is more of a bargain bin clone of a much better film. There is a reason to watch this film and it is Emily Juniper. I hope I am not the only who can see a quality in her. She is gorgeous, strong, and fun in this film, which is saying a lot since her surroundings were so weak. She deserves a much better vehicle for her talents and hopefully other “inspired” filmmakers see it too.