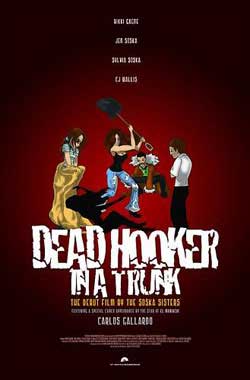 A group of four distinctively different in nature young adults is unfortunately linked in difficult problem of how to dispose of a dead hooker in their trunk. A simple drug run turns into an all out adventure filled with plenty of action and gore to keep avid horror fans defectively pleased.

Directed by: Jen Soska and Sylvia Soska
Written by: Jen Soska and Sylvia Soska
Starring: Rikki Gagne, Jen Soska, Sylvia Soska, CJ Wallis, and John Tench
Low budget horror comedies are flooding the scene, and the exploitation factor of films are being pushed to the max due to more and more fans being desensitized to the amount of horror films tipping the scale of being the most excessive of all time. Running with this initiative, twin sisters Jen and Sylvia Soska created the delightful horror comedy “Dead Hooker in a Trunk” to entertain and disturb the viewer with plenty of exciting plot twists and gory moments. 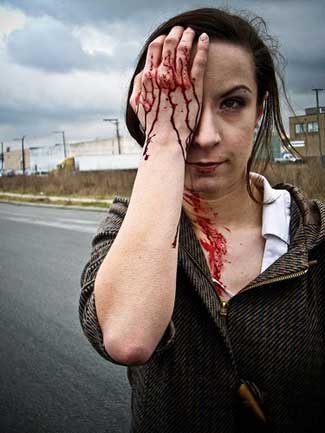 The film begins with two young girls, apparently twins and one wearing glasses, witnessing their mother being beat and killed by their demeaning father. The other twin is brave, and picks up the gun and shoots the father dead. Skipping to the present, the gun wielding young girl is now an adult who is referred to as the Badass (Sylvia Soska) and still lives with her nerdy sister, referred to as the Geek(Jen Soska.) The Badass has a friend nicknamed the Junkie(Rikki Gagne), who asks for a favor to be taken to go get more drugs. Badass agrees, and obliges to also help out the Geek by going to pick up her seemingly boyfriend, Goody Two-Shoes(CJ Wallis.) 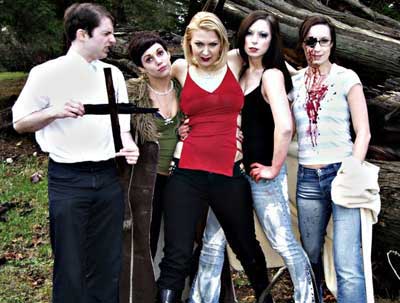 The group’s wild adventure begins as Badass immediately takes charge, and makes it known that the best thing to do is to somehow dispose of the body rather than turning it in. Geek tries to chicken out and go to the police, but her plan is always foiled by her demanding sister. A sisterly falling out happens when they cannot agree on what to do with the body, and Geek eventually lets Badass do what she wants. When they make it to the scene of the drug handlers, they are unfortunately busted by a Chinese gang in another random plot twist. In a bloody battle in which Junkie is horribly wounded, Badass savagely kills the Chinese gang members and they make it back to the car.

Other random plot twists are thrown into the mix, as the next scene when a man in a cowboy hat punches Geek in her temple knocking out her eye, and when Junkie throws a fit and her arm out in the street she is hit by a trunk taking her arm with it. A comedic part happens when Badass goes after the truck driver, beats the living daylight out of him, and then grabs Junkie’s arm to get away with it. The group relies on quick fixes, like sewing Junkie’s arm back on and putting electric tape over Geek’s eye to continue on their journey and solve the mystery of what to do with the body and where it exactly came from. 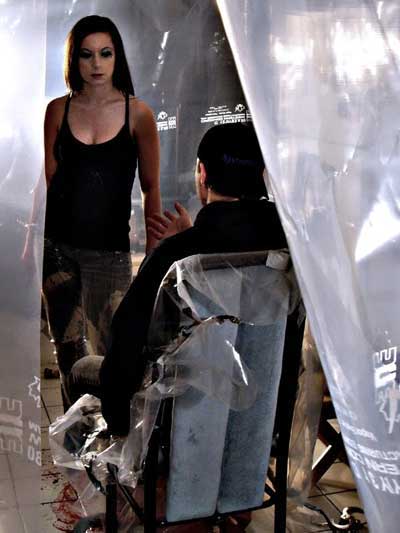 “Dead Hooker in a Trunk” was very well written, as it is an unique venture in storytelling that can be told in the form of an urban legend or campfire tale. Real life sisters play the role of sisters in the film, and their distinct personalities come out in the form of their actions. The blood and gore for the movie was very well done for a low budget flick, as there are scenes of girls drilling victims with power tools and the visual appeal of blood splatter sprinkled in necessary parts of the film. Even though some of the losses of bodily appendages were unrealistic, it added to the plot twists and shock value that really carries the movie’s unique story. 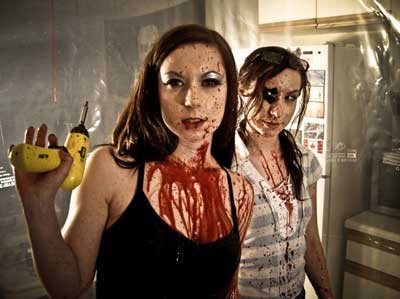 “Dead Hooker in a Trunk” is a must see for low budget horror fans, and another powerful venture for women working hard within the horror genre. Even though horror movies tend to have a male preying on young women, seeing the women getting their share of killing sprees is both empowering and refreshing in this entertaining bloodfest.