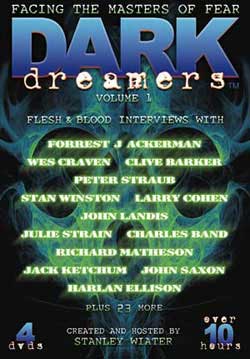 It was just recently that I received word about the Dark Dreamers DVD collection. As it stands, DD is DVD collection of 4 DVD’s that spans over 10 hours. The show originated as a Canadian television series that broadcasted weekly half hour shows. A few of the interview segments profile horror celebrities such as Wes Craven, Clive Barker, Stan Winston, Julie Strain, John Landis, Larry Cohen, Gahan Wilson, Richard Matheson, and Peter Straub.

To review a collection like this is a bit harder as your really only reviewing the presentation of the talent. Beyond that the filming is basic, to the point and collective. The POV is usually only a single camera propped on the the face of the interviewee with an occasional cut back to John the interviewer. Segments are all pretty much the same, a slide show of some movie covers or a brief clip shown. The sound is fine, the video is typical of a lower budget tv show look perhaps without high definition clarity and the questions are well thought out to not mirror every other question you read in a trade magazine.

Over 10 hours is alot for anyone to sit down with, the great thing is you can pick and choose a bit as its divided into disks and interview segments. Now in background checking it was hard to determine if these were ever broadcast, but i’m assuming so with range of important talent on board. None the less the collection is available as a a single purchase which is a better option anyways. The show is pretty no frills as you can get. A simple introduction followed by an immediate jumping into the interview. Sometimes we get a bit of clip segues and slides shown but mostly its a one on one with the talent. The host of this show is Stanley Wiater who doesn’t waste much time just getting on to the interviews. His style is very monotone and unemotional but his questions are good and as we learn very quickly the shows are about the talents on screen and not about interview presentation.

In fact after the initial question, the segments are cut to flow from one answer into the next. I’m perfectly fine with that as the focus of the segments are directed to the person being profiled. Without the Hollywood frills as we have come to know though way too many sensationalistic talk shows we get bare bones but also a more honest and personal relationship with the interviewee. The talent of course ranges from actors, to artists, to authors to directors so each is there own style of presenting. Though as you can tell from many of the answers these are folks who get interviewed alot so with that you get a pretty full plate of interesting feedback.

I thought this was a great collection. My only complaint was that Stephen King was shown in the show’s intro and there doesn’t seem to be a Stephen King segment included. Perhaps there was at one time which didn’t make the approval cut, who knows??

I think any real horror fan will appreciate the analogies and back stories given on a personal level by these mix of talents. Without the constant flow of visual hyper kinetics flying at you, you almost feel like your sitting down with them yourselves. Clive Barker gives a great insight into the workings of an artists and dealing with the onslaught of public appeal and projects coming at him, Julie Strain tells it like it is and what it takes to really stay in the eye of filmmakers. Wes Craven reveals his passion for his work and at the same time knows that as much as he pushes himself sometimes its better to pause life and breathe. This is a taste of the interview segments. Every one revealing, educational, insightful and inspiring .

John did a great thing, that I’d like to see carried forward with another set in the future. Perhaps even a focus such as director talents as its own series or such would prove to be a great addition to any filmmakers library. A treasure of series for real horror fans!