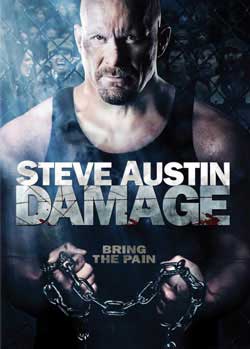 An ex-con battles it out in the cage to pay for the operation that would save the daughter of his victim. Along the way he finds fatherly love, and friendship, in the most unlikely of places.

We like to mix it up a bit here at Horrornews.net and occasionally throw in reviews of action films. Is it horror?, nope…but its still good cinema, just the same. This latest release starring our favorite tough guy Steve Austin is no exception. It’s got violence, heart, story, drama and competition. In fact if you are at all a fan of older Jan Claude films or films like the more recent “Walking Tall” this one’s for you.

Austin plays John Brickner a recently paroled convict who was imprisoned for manslaughter. Serving a 7 year sentence he is paroled early by recommendation.

Though life on the streets is no picnic for an ex con …mainly because work is hard to come by and everyone who offers it doesn’t take too kindly to cons. Soon after landing a construction job, he impresses a local bartender by breaking up a fight. This lands him a second job as a bouncer of which he meets bar waitress and lovely coworker Frankie (Laura Vandervoort). Being a bouncer and Steve Austin…. for that matter impresses the right people which leads to an underground ring of fight club style matches. Though at first John wants no part of the violence. The wife (Veronica) of the man he murdered comes to him and convinces him otherwise.

It appears that he was recommended for early parole by Veronika so that he could help her raise money to cure her daughters surgery. $250K to be exact. Though this was unknown to him at the time. His stay in prison was the result of murdering her husband as an act of self defense.

We don’t really get much more background on the facts than that …other than he served his time and wrote several letters to Veronica during his stay expressing his sorrow offering to help in the future.

As I said there is a touch of heart to this film that appeals enough to John to take the underground road in an effort to save her daughter. If he can prove himself in matches he can fight the major players for major return. “In order to get action, you have to bring action”…as its stated.

John proves he’s a bulldozer on 2 legs as he takes out opponents left and right with a strong persona and a finishing blow that leaves the matches in his favor. Walton Goggins plays the role of Reno, a sharp talking fight manger that believes in John’s abilities. It’s his guidance and perseverance that progresses the matches slowly but surely to the big rings.

In the meantime John checks into parole, deals with fight injuries the best he can and gets a glimpse at the shady world that lies beneath. Reno, has alot to lose as well with a past that has him owing the wrong folks money for botched matches. Frankie takes a liking to John and the 3 of them push forward as a team to all satisfy some greater ambition.

In all, even with the hardcore fist-slamming face-smashing, the film does its best to keep the flow of situations all working out in a positive direction. It’s not that it makes it wimpy but that it gives it heart to counter a balance the violence.

In another perspective it also makes the violence worth something for the result of good intentions and resolution. William B. Davis makes a brief appearance as the all powerful Veltz. Lynda Boyd looked familiar but I couldn’t place her…then after investigation remember she had a pretty decent villain role in the hit series “Sanctuary”. Though its Laura Vandervoort who shines on screen as the helpful but sorrid past hottie who at times reminds me alot of Katie Holmes.

Steve Austin proves again that he’s one dynamite action hero to watch on screen. His approach is subtle and hard all wrapped up in one package that makes his approach highly believable and wanting more.